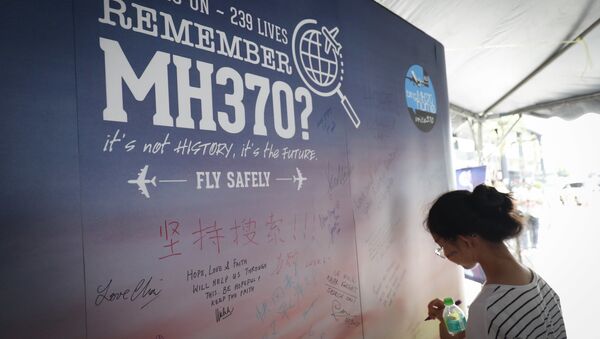 © AP Photo / Vincent Thian
Subscribe
The pilot of the ill-fated Malaysia Airlines Flight MH370 is said to have been suffering from depression following a split with his wife and was actively preparing to end his life by crashing the plane, according to a new report that suggests he deliberately suffocated the entire cabin to make sure no one could intervene.

A new theory on the mysterious disappearance of Malaysia Airlines Flight MH370 claims the captain could have deliberately destroyed the plane after killing everyone in the cabin by the use of depressurization.

According to a former correspondent for The Atlantic and “one of the most authoritative and respected aviation writers” (according to The Daily Beast) William Langewiesche, the 53-year old pilot Zaharie Ahmad Shah split with his wife shortly before the incident over an affair with a flight attendant.

"Zaharie’s marriage was bad. In the past he slept with some of the flight attendants. And so what? We all do," one of Shah’s colleagues said in an interview. "You’re flying all over the world with these beautiful girls in the back. But his wife knew."

His friends said in interviews that, after the split, the pilot was “lonely and sad,” and, despite flirting with women on Facebook, he admitted to spending a lot of time pacing the empty rooms of his house.

On 8 March, the MH370 flight suddenly deviated from its planned route from Kuala Lumpur to Beijing, veering sharply west. According to Business Insider, the sharp change of course would have undoubtedly been noticed by passengers. The pilot could have accounted for that, however, by deliberately depressurizing the cabin, Langewiesche speculates.

"An intentional depressurization would have been an obvious way — and probably the only way — to subdue a potentially unruly cabin in an airplane that was going to remain in flight for hours to come," Langewiesche, who is also a pilot, wrote.

According to Langewiesche, oxygen masks only provide 15 minutes’ worth of air at a 13,000-foot altitude. The aircraft stayed at its 40,000-foot cruise altitude for hours, he suggests, ensuring that the passengers lost consciousness and “gently died without any choking or gasping for air.”

The pilot, however, would have hours of air supplied from four pressurized oxygen masks in the cabin.

An FBI investigation into the pilot's flight simulator revealed in 2016 Shah indeed experimented with a flight profile that roughly matched what is thought to have happened to MH370; that test flight also ended in "fuel exhaustion over the Indian Ocean."

A Fox News report notes that similar cases of suicide by aircraft have happened previously. In October 1999, an EgyptAir pilot deliberately crashed off the coast of Massachusetts. The pilot had previously been determined to be suicidal, the report says.

Germanwings Flight 9525, which crashed into the French Alps in 2015, is believed to be another case of plane suicide. The co-pilot had been known for suicidal tendencies.

Some, however, criticise Langewiesche’s findings. The Daily Beast’s Clive Irving notes that the official international investigation under Malaysian leadership provided a “detailed and measured assessment of Zaharie.”

According to that report, Zaharie appeared to be a “man at the peak of a successful career,” with an impressive experience of 18,000 flight hours on commercial jets.

“The investigators basically removed Zaharie from any suspicion of mass murder and suicide,” Irving writes, criticising Lengewiesche for blaming the crash on Zaharie “on the basis of what amounts to little more than hearsay.”