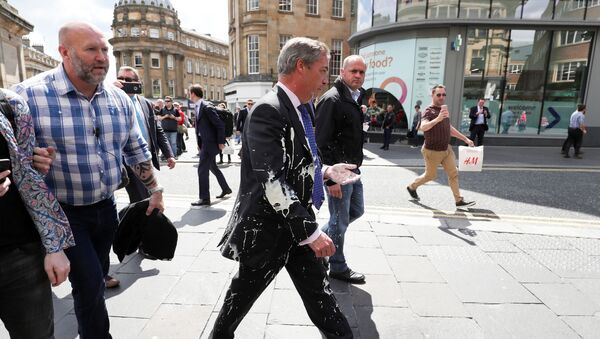 Several politicians in the UK and elsewhere have been doused with the substance over the course of 2019, including Tommy Robinson and controversial YouTuber and UKIP candidate Carl Benjamin on repeated occasions.

A man has admitted to assaulting Nigel Farage by throwing a milkshake over him, in the first prosecution to follow such an incident, which has become a nationwide crimewave.

Paul Crowther, who launched his exorbitantly-priced banana and salted caramel drink at the Brexit Party leader as he walked through Newcastle ahead of May’s European elections, pleaded guilty to common assault and criminal damage at North Tyneside Magistrates' Court. The latter charge relates to a microphone damaged during the incident. He was ordered to pay £350 compensation to Farage to cover the cleaning of the suit and damage to the lapel microphone, as well as an £85 victim surcharge and £85 in costs.

​In the wake of his attack, the 32-year-old - who was immediately placed in handcuffs by police - told journalists the act was “a right of protest against people” like Farage, as the “bile and the racism [the Brexit Party leader] spouts out in this country is far more damaging than a bit of milkshake to his front”.

The incident was caught on camera, with a flustered and disgruntled Farage storming away with his suit covered in the drink, and rebuking a member of his security detail on the basis he “could’ve spotted that a mile off”.

In reference to the cost of the milkshake, supporters of Crowther set up a crowdfunding page - Get Paul Crowther his milkshake money back - which raised £1,705.