And Then There Were Five: Dominic Raab Eliminated From Tory Leadership Contest 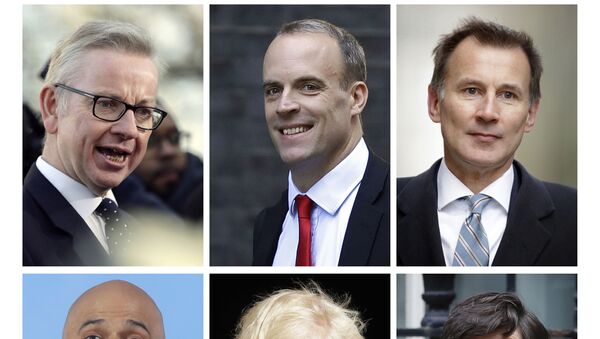 Theresa May will step down as caretaker prime minister on 22 July and be replaced by one of two candidates chosen by Conservative Party members after a postal ballot. The new leader will be thrown straight in the deep end and tasked with delivering some form of Brexit.

Boris Johnson remains well clear of his rivals after the second round of voting among MPs for the leadership of the Conservative Party.

Only one candidate - Dominic Raab - has been eliminated after failing to reach the required threshold of 33 votes on Tuesday, 18 June.

Mr Johnson topped the poll with 126 votes, Jeremy Hunt came second on 46 and Michael Gove got 41.

But Rory Stewart got 37 and Sajid Javid scraped over the line with 33.

​Those five contenders will now take part in a live television debate on Tuesday evening before a third and final ballot on Thursday, June 20.

The two who make it through after that will find themselves on a ballot paper which will be sent out to the Conservative Party’s 160,000 members and they will choose the winner next month.

Mr Johnson is growing stronger as every day goes by - on Monday, 17 June, Andrea Leadsom, the former leader of the House of Commons who bowed out of the leadership race last week, gave her backing to him.

She told LBC Radio Mr Johnson "will be a very good leader for our country."

​He has also received the support of the Health Secretary Matt Hancock, who quit the contest over the weekend after getting only 20 votes in the first round.

Mr Johnson won 114 votes in the first round.

Theresa May stepped down as party leader earlier this month after failing to get Parliament's approval for her Brexit deal.

​Mr Johnson has promised to deliver Brexit by the new deadline set by the EU - 31 October - and has said he will consider a no deal Brexit if it is the only option left.

Mr Hunt, who is the Foreign Secretary, and Mr Gove, the Environment Secretary, have also promised to deliver Brexit but differ slightly in their approaches to the issue.

​The EU says it will not reopen negotiations over Brexit, which makes it likely that whoever is the new prime minister they will have to choose between pushing through a slightly amended version of Theresa May’s deal or throwing it in the bin and going for a no deal Brexit.

But many Tory MPs are steadfastly opposed to a no deal Brexit, which they fear will hit trade, and could team up with Labour and the Liberal Democrats to block such a course of action in Parliament.

Mr Raab said during his campaign he would be prepared to prorogue Parliament and push through Brexit without MPs’ approval but Mr Johnson has not so far matched that threat.

Mr Johnson is popular with grassroots Tory party members and is widely expected to win the vote next month.

He has an innate ability to energise voters and even get support from Labour supporters but he has a long record of making misleading and false statements, verbal gaffes and an inattention to detail during his time as Mayor of London and Foreign Secretary.

Twitter had a mixed reaction to the leadership results. Supporters of Rory Stewart commended his speedy momentum with others observing less hopeful outcomes for Jeremy Hunt and Michael Gove.

Not much movement in latest results from #ToryLeadership, but @RoryStewartUK performing the best from first to second round. 30 more MPs now up for graabs. See what I did there? pic.twitter.com/xF1EMaBWUe

Obviously, very bad set of results for Jeremy Hunt and Michael Gove. Slightly better for Gove as some Raab MPs are Gove-curious. None, to my knowledge, are Hunt-inclined. https://t.co/Kc4hWpyk5L

Others celebrated Boris Johnson's second consecutive result as the top candidate with an increased lead.

Political genius Johnny Mercer declares Johnson is a unifying figure...as 187 of his parliamentary colleagues decline to vote for him as leader #ToryLeadership pic.twitter.com/BGrgyRbF83

👍🏻 A great result for @BorisJohnson tonight. He’s miles ahead of any other candidate and clearly has the confidence on the Parliamentary Party.
That is where the real momentum is.

So let’s deliver Brexit and unify our party and the country. @BackBoris 👦🏼

Opponents expressed concern about the prospect of his premiership.

Well, that's surprising. #BorisJohnson is going to get it and God help us all. #GTTO https://t.co/wH8ouDSE5j

​Dominic Raab, the sole candidate to fail to get through to the first round had supporters commend his campaign and expressed hope for his role in a future government.

I am now #ReadyForRaab to have a senior cabinet position … @DominicRaab 👀

So all the Raab fans , where are you now moving your vote to? I'm strongly considering @Jeremy_Hunt

Yes I'm sad about Raab but the 2nd Ballot is now old news. Next #ToryLeadershipContest

​Some criticised the amount of airtime spent on a Tory leadership election in which most of the country has no voice.

Why was there a TV debate for the Tory leadership hopefuls? It's not a general election and most of the electorate can't vote on this unless they're Tory members. Wasted money and wasted time both of which would have been better spent elsewhere. #C4Debate #ToryLeadershipContest