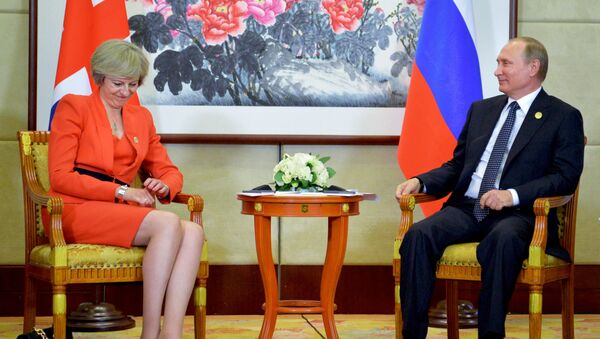 Relations between Russia and the United Kingdom hit an all-time low following the poisoning of former GRU operative Sergei Skripal and his daughter Yulia in the British city of Salisbury in March 2018. London immediately accused Moscow of being behind the “attempted murder” – an allegation which the Russian side has strongly denied.

Outgoing UK Prime Minister Theresa May is considering the possibility of a one-on-one meeting with Russian President Vladimir Putting on the side-lines of the G20 summit in Japan later this month in a bid to thaw relations before her successor comes to power, The Times reported.

If a meeting were to be arranged, it would be the first high-level encounter since the Salisbury incident, in which former GRU officer Sergei Skripal and his daughter Yulia were exposed to what London claimed was the nerve agent Novichok.

With the investigation still underway, UK authorities rushed to accuse Russia of orchestrating the attack and ordered a massive expulsion of Russian diplomats from the country, thus prompting a wave of coordinated ousters of Russian diplomatic staff across the world.

Moscow has vehemently rejected the accusations and offered to launch a joint probe into the case, but London refused to accept assistance in the investigation as well as to provide samples of the substance allegedly used against the Skripals.

May’s representative said that it is too "premature" to discuss such a meeting, while Kremlin spokesman Dmitry Peskov said that there's no information on the matter yet, and that he cannot comment on it.

Social media users, however, did have something to say. Many pointed out that it is weird that Theresa May is trying to do more “in the dying days” of being the UK’s prime minister than she did during her term, and suggested that the meeting seems irrelevant now:

It is striking that May is attempting to do more in the dying days of being PM than during the rest of her utterly dismal tenure https://t.co/BmYqrOPIHU

Not sure why a Putin meeting would make sense when May is halfway out the door already. https://t.co/PtnVZil90y

Some noted that if such a diplomatic move were to be proposed by Labour Party head Jeremy Corbyn, who has repeatedly called for a dialogue, he would’ve been savaged:

Yet Corbyn is branded a traitor whenever he suggests diplomacy. https://t.co/IZAKl7s9bH

UK and Russia are examining the scope for a thaw in relations, including the possibility of a meeting between Vladimir Putin and Theresa May at the G20 leaders’ summit in Japan.

Others couldn’t help but ridicule the situation and cracked a bunch of jokes, including on the Salisbury fuss, which has on multiple occasions been slammed as a false flag online:

Where she says “sorry about the novichok false flag Vlad. It didn’t do me any good anyway...”

Theresa May says I know I've been highly critical of you Mr Putin but could you forgive me and please just make me look just a little bit relevant before I go? https://t.co/46nf5IB9RM

UK and Russia consider May-Putin meeting.
For her to seek asylum?https://t.co/U3An0hzjcf

Oooh! We can fix up a trade deal so we can import Ladas again! 🙄

A vast number of users emphasised that such meetings are an integral part of diplomacy:

It makes far more sense for the UK to seek friendship in Russia and China and collaborate with the new Belt and Road infrastructure.

Some are already grumbling at the thought of a @theresa_may/#Putin meeting in the margins of this month's #G20OsakaSummit yet such contacts are not prizes for good behaviour but essential parts of the diplomatic process. Better to meet + deliver a strong message than sulk

The Times’ report comes slightly over a week after President Putin said at the St. Petersburg International Economic Forum that Russia and the United Kingdom needed to “turn the page this page connected with spies and assassination attempts” once a new prime minister is elected.

Earlier this month, Kremlin spokesman Dmitry Peskov stressed that Russia is not intending to change its behaviour towards the UK and will continue seeking mutually beneficial relations.

A spokeswoman for May’s office responded later by saying that Moscow needed to change its behaviour in order to improve relations with London.