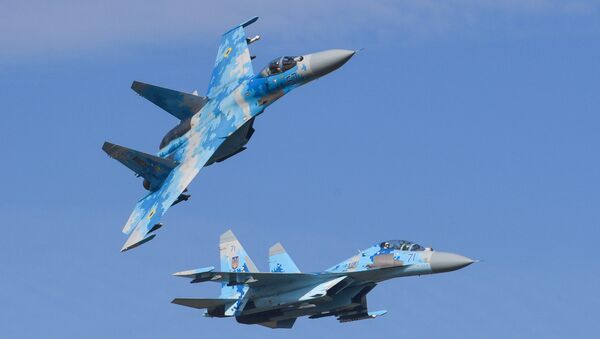 Last week, the Russian Armed Forces' official newspaper, Krasnaya Zvezda, reported that Russian jets had been scrambled 10 times in the past few days to intercept foreign planes that were detected near Russia’s airspace.

Su-27 fighters have intercepted US B-52H bombers approaching Russia’s border from the direction of the Black and Baltic Seas, the country’s National Defence Management Centre has reported.

"On 17 June 2019, crews of the Russian Su-27 fighters... intercepted US Air Force B-52H strategic bombers, which were approaching the state border of the Russian Federation from the direction of the Black and Baltic seas," the centre said.

It added that no violations of the Russian border were allowed to take place.

The National Defence Management Centre also said that the flights of the Russian jets were carried out in strict accordance with international airspace norms.

In April, the Russian military said it had detected 20 foreign planes while they were on reconnaissance missions near the country's airspace. However, no cases of trespassing were recorded then.

Earlier this month, US President Donald Trump announced during a press conference with Polish President Andrzej Duda that the US would send 1,000 more troops to Poland. Mr Duda also suggested that the US could establish a permanent base in Poland, but Mr Trump was reluctant to accept the offer. Moscow responded by saying that it would retaliate in the event of an attack from Polish territory.

Russia has repeatedly criticised foreign countries for their military build-up near Russian borders, saying that NATO's aggressive moves could lead to escalation and result in a full-scale military conflict.