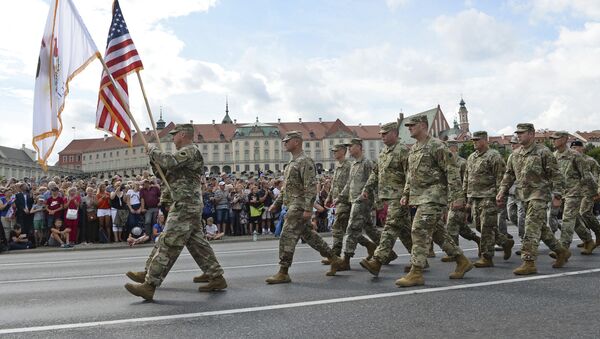 MOSCOW (Sputnik) - Russia will reinforce its troops at the country's western border as a response to US plan to send additional troops to Poland, Vladimir Dzhabarov, the deputy chairman of the Russian upper house's foreign affairs committee said on Monday.

He stressed that Russia would retaliate if it faced an attack from the Polish territory.

"Poland seems not to understand this. Perhaps, it wants to be someone's military base ... In the meanwhile, US troops deployment will not anyhow contribute to the Polish security", Dzhabarov went on to say.

"As part of the agreement, we decided that there would be six locations in Poland for stationing troops", Blaszczak told the Polish Radio.

According to the minister, the locations will be determined in accordance with bilateral arrangements.

"We [Poland] will be involved in decision making. I am active. I make proposals and discuss the details. It is important to strengthen the eastern flank of NATO, and consequently, the eastern flank of our country, in order to deter a possible aggressor, and we are focusing on that", he added.

Last week, US President Donald Trump and Polish President Andrzej Duda agreed that the United States would establish a reconnaissance squadron of MQ-9 Reaper unmanned aerial vehicles in Poland and place an additional 1,000 US troops in the country at Warsaw's expense.

The deployment would add to the 4,500 US servicemen currently deployed in Poland. In turn, Warsaw expressed commitment to prepare at its own expense all the necessary infrastructure to accommodate such a large number of US troops and hardware and to build a military airfield.

For months, there have been speculations about the US plans to set up a military base in the country, as Polish leadership has cited the alleged Russian threat as one of the reasons for its military build-up.

Moscow has repeatedly stressed that it will never attack any of the NATO members. According to Russian Foreign Minister Sergei Lavrov, NATO is well aware his country has no plans to attack anyone and uses the alleged threat as a pretext to deploy more troops near Russia's border.