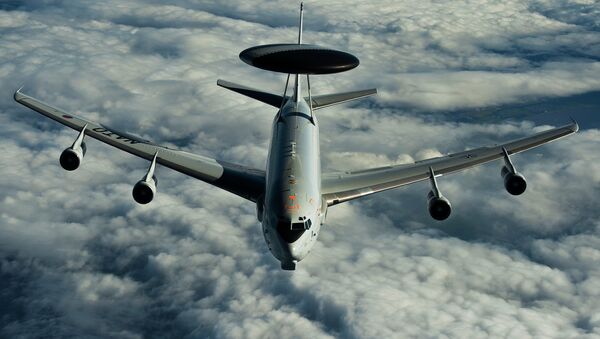 Ecuadorian authorities claim the airport will not officially become a US military base and will be used on a periodic basis. US officials deny any negotiations regarding using Ecuadorian territory for military purposes.

Ecuador has reportedly given the US permission to use Bartolome Island of the Galapagos archipelago as a base for US Air Force planes, Latin American TV network Telesur reported Monday, citing Ecuadorian Minister of Defence Oswaldo Jarrin.

According to the report, a Lockheed P-3 Orion, an intelligence-gathering plane, and a Boeing 707 carrying a long-range radar Airborne Warning and Control System (AWACS) will operate from the San Cristobal airport located on the island. The runway is expected to be extended to accommodate the heavy aircraft.

According to Jarrin, the two planes will conduct missions to “fight drug trafficking.”

Washington has denied that such a deal exists, and claims there have been no negotiations over the matter.

“While the US-Ecuador defence relationship continues to move in a positive direction, DoD has not signed an agreement with the Government of Ecuador to use the Galapagos airfield and is not in formal negotiations to do so,” Pentagon spokesman Chris Mitchell said, according to The Independent.

The purported deal has sparked massive criticism within Ecuador. The establishment of foreign military bases on Ecuadorian soil is directly prohibited by the Constitution of Ecuador, the Telesur report notes.

According to article five of the nation’s Constitution, "the establishment of foreign military bases or foreign installations for military purposes will not be allowed. In addition, it is prohibited to cede national military bases to foreign armed or security forces."

This was pointed out by Carlos Viteri, an opposition lawmaker, who argued that “what is being proposed by the government through the Ministry of Defence is unacceptable and the fact that it intends to cede an inch of Ecuadorian territory should be prohibited."

Defence Minister Jarrin attempted to defend the deal, saying San Cristobal will not be a full-fledged US base.

“A base means permanence, there will be no permanence of anyone, the P-3 and Awac will meet periods no longer than a week," he argued. "Galapagos is Ecuador’s natural aircraft carrier because it ensures permanence, replenishment, interception facilities and is 1,000 kilometres from our coasts.”

A former president of Ecuador, Rafael Correa, took to Twitter to blast the latter of Jarrin’s remarks.

​“No, Mr. Minister. Galapagos is not an "aircraft carrier" for the gringos to use. It is an Ecuadorian province, world heritage, patriotic ground,” he wrote in Spanish, referring to the fact that the archipelago is a UNESCO world heritage site due to its unique biodiversity.