Trump: 'Obama Had to Know' About FBI's 'Setup' to Prevent My Presidency 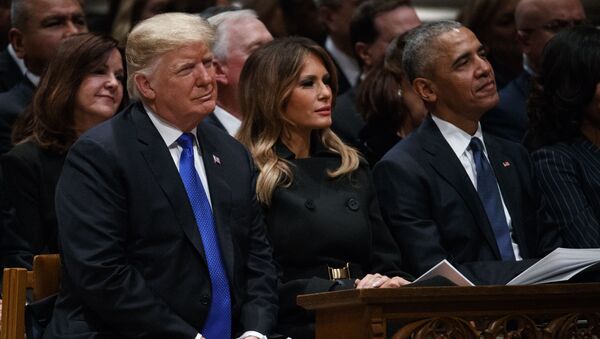 © AP Photo / Evan Vucci
Subscribe
When asked if he linked the collusion allegations busted by the Mueller report to President Obama, Donald Trump chose not to beat around the bush, adding, though, that an official statement on the subject is yet to come.

President Trump pointed out that former President Barack Obama “had to know about” what her referred to as “a setup” to prevent him from becoming president.

Appearing on ABC's "This Week", the POTUS continued to assert that Special Counsel Robert Mueller’s report effectively rendered the allegations of his campaign’s collusion with the Kremlin irrelevant, as well as accused “the lowlifes” in the FBI’s ranks of working against him.

Anchor man George Stephanopoulos weighed in, stressing that President Trump “clearly believes” that there were certain people “working against” him.

"Do you think President Obama was behind it?" he asked in a straightforward manner, prompting Trump to ascertain that since the matter “went very high up in the chain”, then sitting President Obama “certainly must have known about it”.

“…but you're gonna find that out. I'm not gonna make that statement quite yet, but I would say that President Obama had to know about it", Trump reiterated, pointing to an earlier revealed message exchange between FBI officials Peter Strzok and Lisa Page in which they called out the president, prompting the GOP to demand that the origins of the Mueller investigation be thoroughly looked into.

To round off the interview, Stephanopoulos posed another straightforward question, wondering if Trump believed Obama had spied on his campaign. The president shrugged his shoulders in response expressing hope that “we are gonna find out”.

The Mueller report, released in April, reached the conclusion that President Donald Trump's campaign team did not collude with Russia during the 2016 vote. However, the document separately described 10 episodes regarding Trump's actions that could possibly constitute obstruction of justice.

Russia has repeatedly denied any claims of interference in the US political system, stressing that the allegations were made up as an excuse for the election loss of Trump's Democratic opponent Hillary Clinton, as well as to deflect public attention from more pressing domestic issues.