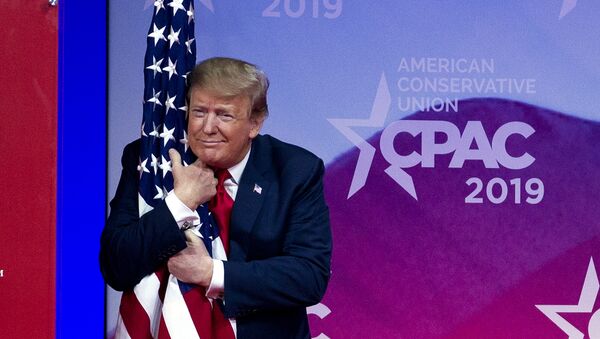 To celebrate US Flag Day the White House’s official Twitter account has posted a viral photo from a spring event, featuring the US president getting strangely close with the national symbol, as many commenters suggested.

The viral photo of US President Donald Trump, hugging Old Glory and smiling on the stage of the 2019 Conservative Political Action Conference, was posted on the official account of the White House to mark Flag Day. The celebration, commemorating the adoption of one of America’s national symbols, falls on the birthday of the current US president, who turned 73 on 14 June.

​This move has prompted a Twitter storm. While many commenters branded it inappropriate and outrageous, others took a more joking tone and suggested that the relationship between Trump and the flag went beyond an affectionate embrace.

I know it's asking a LOT from you folks in the @WhiteHouse, but please take down this picture. Dry humping the American flag is neither patriotic nor respectful to the flag.

Seriously this picture is so disrespectful and embarrassing, if they had any common sense they would hide it and hope it never shows itself again. Instead they tweet it out. Headline should be sexual predator assaults US flag.

Usually you at least buy it dinner first.

Pretty sure that respect for the flag doesn't entail dry-humping it.

​There were those who mentioned Trump’s rival, deceased Senator John McCain. His name popped up in Twitter trends again when some decided to throw a troll party for Trump on his birthday.