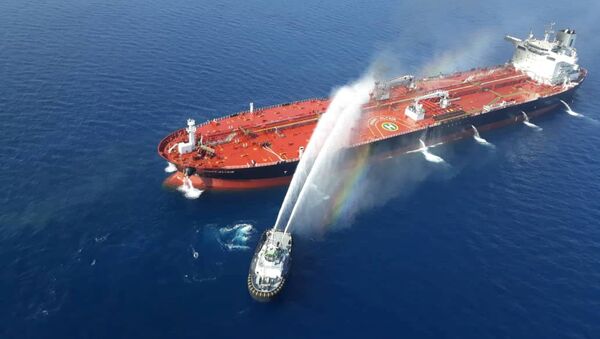 © REUTERS / TASNIM NEWS AGENCY
Subscribe
International
India
Africa
The state-run agency, IRNA, earlier reported that Iranian rescue services had saved 44 sailors from oil tankers after the vessels were attacked in the Gulf of Oman on 13 June.

Iran's Press TV has shared a video, originally posted by the website Islamic Republic of Iran Broadcasting (IRIB), showing 23 rescued crew members from Front Altair, one of the two oil tankers targeted in the Gulf of Oman on Thursday, in "full health" in the Iranian port of Jask.

Video shows crewmembers of a tanker hit by suspicious blast in Sea of Oman who were saved by Iranian rescue teams and transferred to Jask port.#SeaofOman pic.twitter.com/XE2Nd5cynF

According to the media outlet, the footage proves that reports claiming that Tehran avoided helping the sailors, including 11 Russians, 11 Filipinos and one Georgian, were false.

Several people interviewed in the video have praised Iran for its "excellent hospitality" and said that Tehran had provided them with "water, provision, and also new clothes".

The footage was released after reports emerged that Iranian rescue teams had evacuated 44 sailors from both ships and transferred them to Jask. US officials quoted by CBS, however, claimed that those reports were "patently false".

On 13 June, two oil tankers, Panama-registered Kokuka Courageous and Marshall Islands-flagged Front Altair, owned by Norway's Frontline, were attacked in the Gulf of Oman. The Japanese Trade Ministry said in a statement that both vessels were carrying "Japan-related cargo".

Numerous news outlets have alleged that the ships were subjected to torpedoes, which triggered explosions and a fire on at least one of them.

Shortly after the incident, US Secretary of State Mike Pompeo accused Tehran of being behind the attacks - something which prompted US Central Command to send the US Navy destroyer USS Mason to the scene to "provide assistance".

Iran's Foreign Minister Mohammad Javad Zarif said that the timing of the suspected attacks was "suspicious" and insisted that Washington's allegations were part of "sabotage diplomacy".

Meanwhile, the Iranian mission to the UN has called on the US and its regional allies to "stop warmongering and put an end to mischievous plots as well as false flag operations" in the Middle East and has flatly denied Tehran's involvement.

Thursday's incident comes just a month after four oil tankers - two Saudi, one Emirati, and one Norwegian - were attacked in what the UAE labelled as "acts of sabotage" near the port of Fujairah. Several US officials also blamed Tehran for this as well.

The situation in the Middle East has been tense since the United States unilaterally pulled out from the 2015 nuclear deal with Iran in May 2018, but took a dramatic turn last month after Washington boosted its presence in the region by deploying an aircraft carrier strike group and a bomber task force in a "clear and unmistakable message" to Tehran that any attack on American interests or those of its allies would be met with "unrelenting force".