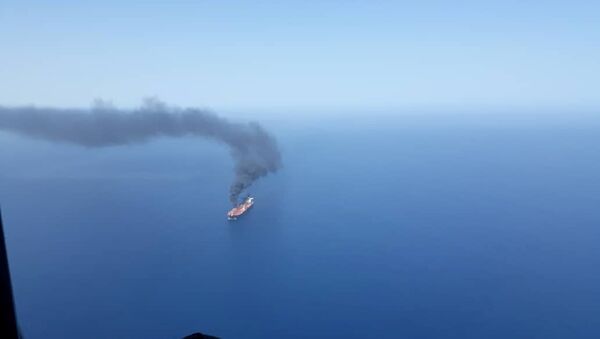 © REUTERS / TASNIM NEWS AGENCY
Subscribe
STOCKHOLM (Sputnik) - The chief executive of Norwegian shipping firm Frontline Management, the owner of the Front Altair oil tanker, which was reportedly attacked in the Gulf of Oman on Thursday, has ruled out the possibility of a technical malfunction being behind the fire aboard the vessel, in an interview published on Friday.

"We exclude [the possibility] that technical malfunctions on the ship caused [the fire]. This is a serious incident that must be thoroughly studied and investigated. We, of course, will play an active role in this," Robert Hvide Macleod told Hegnar news outlet.

The incident near the Strait of Hormuz, a strategic waterway that links the Gulf of Oman and the Persian Gulf, took place on Thursday. Front Altair and another tanker, Japanese-operated Kokuka Courageous, were affected by explosions and caught fire.

While the causes of the incident, which happened in the waters between Gulf Arab states and Iran, remain unknown, US immediately pinned the blame on the Islamic republic, claiming that this assessment was based on intelligence.

The United States even announced that its USS Mason destroyer was on its way to the Gulf of Oman, which mounted the already aggravated tensions between the two countries. Meanwhile, Tehran has rebuffed all accusations.

unimaro
14 June 2019, 18:24 GMT1
000000
This incident is similar to the MH17 incident in 2014. Israel/usa and its ISRAELI-owned MSM and media blamed Russia for shooting down the plane before any investigation was done. Same thing here only it’s Iran who’s the scapegoat.