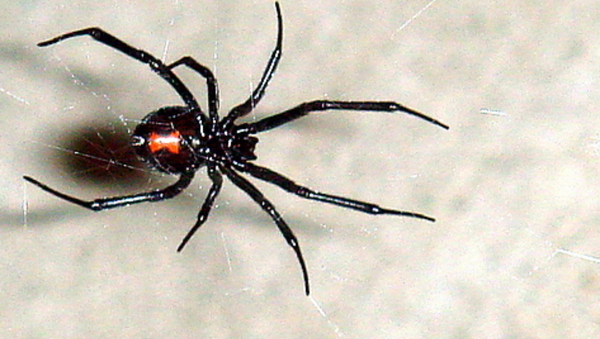 CC BY-SA 3.0 / Chepyle / Black Widow
Subscribe
Back in 1995, NASA researchers gave spiders drugs to see what effect they would have on how well the creatures spin their webs. After all, what better way for space researchers to spend their time?

In April 1995, an article in NASA Tech Briefs described how researchers at the US space agency’s Marshall Space Flight Center in Alabama gave spiders different drugs, from caffeine to marijuana, to study the effect the substances had on how well they spin their webs. While the results produced a startling visual aid to complement the Reagan-era Drug Abuse Resistance Education (DARE) program’s “just say no” message, scientists say it’s a mistake to directly translate the effects substances have on spider brains to how they’ll affect human brains.

Dangers of Herbal Tea: How Your Favorite Drink Might Lead to Cancer

According to the article, the scientists exposed orb weavers, known for their beautiful, regularly structured webs often seen in gardens, to a number of different chemicals via spiked drinking water. Then, when the spiders set to work building their webs, the scientists would look at the geometric variations from a sober spider’s web to determine how toxic the substance was.

Some of the chemicals included THC from marijuana; the stimulant benzedrine; the hypnotic drug chloral hydrate; and caffeine like that found in your morning tea.

The effects were striking:

Results of a 1995 NASA study in which spiders were given different chemicals
© Screenshot; NASA Tech Briefs

"It appears that one of the most telling measures of toxicity is a decrease, in comparison with a normal web, of the numbers of completed sides in the cells: the greater the toxicity, the more sides the spider fails to complete," the scientists said in the study.

The study was effectively a copy of one done in 1948 by a German zoologist named H. M. Peters and a pharmacologist named Peter Witt whom he roped into the experiment, according to a 1985 article in the New York Times. However, this time around, researchers used some different drugs and had the benefit of digital analysis to accurately measure the degree of geometric difference in the webs, as the NASA article explains.

Based on the photos, one would be led to assume that your morning cup of joe is likely frying your brain worse than even the biggest “reefer madness” proponent could imagine, right?

While one study published last month in the European Journal of Epidemiology found that people who drank two or more cups of coffee per day had a lower risk of death from cardiovascular disease, diabetes, cancer and other ailments, others have suggested caution should be exercised in your coffee consumption.

One nutrition researcher told Sputnik that children can’t process caffeine as well as adults, so kids under 14 shouldn’t drink any coffee at all, and pregnant women shouldn’t drink more than three cups per day. Plus, while it has heart benefits, caffeine is also “an aggravator and accelerator of one's heart rate," according to another nutritionist, and thus a danger to those with heart conditions.

In perhaps a macabre hint of humor by the NASA magazine’s editors, the story the 1995 study shares a page with is one about a new device that assists a would-be rescuer with chest compressions on a person who’s experiencing cardiac arrest.

However, another study in 2018 found that because caffeine triggers the release of nitric oxide in the body, which improves the functioning of blood vessels, folks suffering from chronic kidney disease benefit greatly from choosing that “grande” over a “tall” at Starbucks.

However, if your cuppa’s too calescent, it might give you esophageal cancer, another study says, so be sure to blow on your bean juice before consuming!