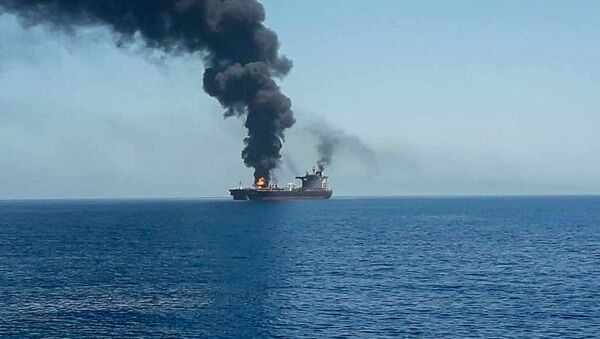 Shortly after two oil tankers - Kokuka Courageous and Marshall Islands-flagged Front Altair - were attacked in the Gulf of Oman, the US placed the blame for the incident on Iran. Tehran has, for its part, denied involvement in the incident.

Iran has warned the US to stop playing the blame game over the attack on two oil tankers in the Gulf of Oman near the Strait of Hormuz, a strategic waterway linking Middle East crude producers to key world markets.

"The suspicious nature of incidents for oil tankers is not a joke. It is not only not funny, but it is also worrying and alarming”, Iranian Foreign Ministry spokesman Abbas Mousavi said in a statement as cited by Press TV.

While Tehran has urged the international community to refrain from premature conclusions, Washington dispatched the US Navy destroyer USS Mason to the Gulf of Oman.

Frontline shipping firm expects a full salvage team and managers to arrive at Front Altair tanker hit by an explosion in the Gulf of Oman on Saturday to assess damages, company spokesman Pat Adamson said Friday in a statement obtained by Sputnik.

"One further salvage tug is expected on scene with an ETA of 1300 hours today, June 14 equipped with salvage fire-fighting and towing capability. A further specialist team which consists of full salvage team and ship management personnel is expected to arrive 15 June for full assessment of the damages," the statement read.

The company said that the fire on the vessel had been extinguished and the tanker was stable.

"All 23 crew members of the ‘Front Altair’ are safe and doing well. Following their disembarkation from the Iranian naval vessel at the Iranian port of Jask the crew are on their way to Bandar Abbas prior to repatriation," the statement read.

"The incident occurred when [Japanese] Prime Minister Shinzo Abe visited Iran and met with our Supreme Leader [Ayatollah Ali Khamenei]. Someone is behind this to implicate Iran. It is the United States," Iran’s deputy permanent representative to the United Nations Eshagh Al Habib told the Japanese NHK broadcaster.

The US military has released a video, claiming it shows Iranian forces removing an unexploded limpet mine from a tanker which suffered an explosion in the Gulf of Oman.

The statement claimed that at 09:12 a.m., a US plane saw Iranian fast attack vessels pulling a rat from Altair from the water. After it, the Iranian crew had requested that Altair crew, rescued by the Hyundai Dubai motor vessel, be transferred to the Iranian vessels.

The Iranian Foreign Ministry dismissed on Friday Washington's accusations claiming that Tehran was responsible for the recent attacks on oil tankers in the Gulf of Oman as "baseless."

"Apparently for Pompeo and other American officials accusing Iran of the incident with the oil tankers is the easiest thing to do," Iranian Foreign Ministry spokesman Abbas Mousavi said, dubbing the accusations as baseless.

He noted that Iran was responsible for ensuring safety in the Strait of Hormuz and promptly saved the crews from the attacked tankers.

In the meantime, the United States announced on Thursday that its navy destroyer USS Mason was on its way to the Strait of Oman.

A source in the Russian Foreign Ministry voiced the belief in a comment for Sputnik on Friday that it was premature to accuse Iran of being behind the attack on two oil tankers in the Gulf of Oman, as judgments should be made only following investigation.

Two oil tankers, Front Altair and Kokuka Courageous, were hit by explosions on Thursday. While the cause of the blasts remains unknown, US State Secretary Mike Pompeo immediately accused Iran of being behind the attack. Iran denied being involved in the case, stressing that Washington's claims were unsubstantiated.

"It is too early [to draw conclusions]. We have to look into the incident, carry out a probe and see what its results show," the source said.