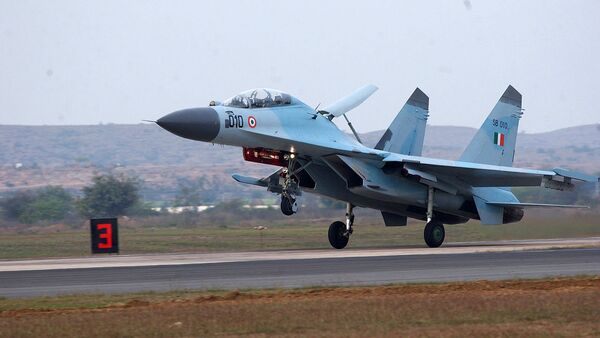 Last month, several reports suggested that the IAF planned to integrate Israeli Rafale's I-Derby missiles with the Su-30MKI by 2022 in view of the limited range of the R-77 BVR missiles currently fielded on the fighter.

According to Indian defence sources, as per the "licence technical documentation", any modification to integrate third country armaments requires the original equipment manufacturer's permission.

Last month, several reports suggested that the IAF was planning to integrate Israeli Rafale's I-Derby missile with the Su-30MKI by 2022 in view of the limited range of the R-77 BVR missile currently fielded on the fighter.

The other BVR missile in the IAF inventory — MBDA Mica, fitted on the Mirage — cannot be integrated with the Su-30MKI because of restrictions of the French government.

The I-Derby extended range beyond-visual-range air-to-air missile (BVRAAM) is considered to be a highly capable weapon for medium and short range engagements, and is equipped with a software-defined radar seeker and a dual-pulse solid rocket motor to provide the missile a "fire and forget" engagement capability, beyond visual range and under all weather conditions.

The missile has a range of 100 km and has been selected to be the primary air-to-air missile to arm the IAF's Tejas Light Combat Aircraft (LCA) following successful test-firings in July 2018.

Currently, around 200 Su-30MKIs multirole fighter jet are operational in the IAF. State-owned Hindustan Aeronautics Limited (HAL) has been producing and assembling the aircraft under licence production from Russia. Besides an earlier contract of supplying 272 Su-30MKI to the IAF, the Bangalore-based firm has also offered to license-produce 40 additional Su-30MKIs; however, no decision has been made to date.