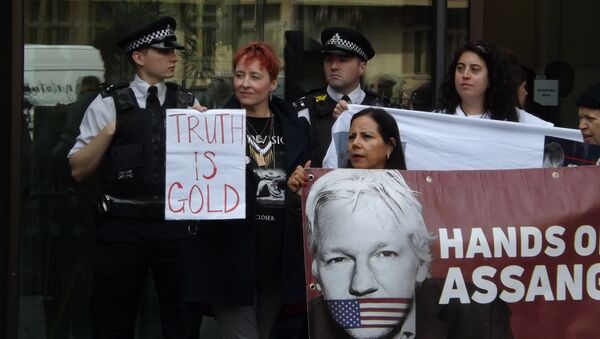 WikiLeaks founder Julian Assange refuted during a court hearing on Friday all of the United States' accusations against him and protested against his possible extradition to the country. Randy Credico, a long-term associate of the WikiLeaks founder, has commented on the UK court's decision.

Randy Credico: Unfortunately, until his hearing, Assange will be held in a hideous and dungeon-like prison in London where he's currently serving a 12-month prison sentence for skipping bail, an infraction where anybody else would have been given a very small fine.

I think it is a good decision to give him some time to prepare a legal defence in the UK; I think it is a good decision in the sense that this will help give us time to mobilise for Mr Assange, not only in the UK, but in the US. So I am hopeful that the intervening year will give us enough time and energy to make this an international movement, which it is becoming already. This case is becoming an international movement.

Randy Credico: I think that the pressure, that the response from journalists all over the world who are fearful that this would set a dangerous precedent - there were journalists in the past and media outlets in the past that were not so supportive of Assange, and suddenly they have jumped on board. I think that the British government and the court system and all that apparatus there realise that this is a very, very sensitive case and they don’t want to rush and look like they are handmaidens of the United States.

Sputnik: What can Julian Assange’s legal team do over the course of the year to help him?

Randy Credico: Well, I think that they have already done a fantastic job. He has got the best legal minds and more will come on board. In the US you got the ACLU and other huge entities that have jumped on board. What they can do is just do what they are doing in the UK: cite, for instance, that there is absolutely no opportunity for him to get a fair trial in the Eastern District [Court] of Virginia; this is a complete sham.

Sputnik: Under the 2003 Extradition Act, the UK is prohibited from extraditing someone to a country where they could face the death penalty. How likely is it that Mr Assange will be extradited at all?

Randy Credico: First of all, I don’t think he will be extradited. I think that the momentum is building on his behalf and the US has been caught with its pants down. This was a major mistake for them to throw in the Espionage Act, which includes the death penalty. Plus on top of that, if you take a look at a precedent that was just set in the UK system, the case of Lauri Love, where it was proven to a judge in the High Court there that US prison conditions are so bad – these are some of the most brutal prison conditions on the planet – in the federal system, where he would end up. He would end up in a place that would be like a jungle.

I mean solitary confinement, the mentally torturous environment of the United States federal prison system, particularly in solitary confinement at a Supermax [prison]. He would be headed either to the death penalty or a Supermax. All judges, anyone who is judging this case, must take that into consideration. It would be a violation of his human rights.

Now compare Assange's brutal treatment with the treatment that was accorded mass murderer Augusto Pinochet. When the Spanish government tried to extradite him from London to Spain to face trial on multiple and indisputable charges of crimes against humanity, the Chilean despot stayed in a large, luxurious mansion during the extradition request procedure. However, the home secretary squelched the extradition request, apologised to the unrepentant dictator and sent him home on a first-class trip back to Santiago, Chile.

So I think that that being put forward to the court, with the brutality of the federal prison system, I think that it is very unlikely that a high-minded British judge would send him to the United States to face this kind of brutal treatment.

Sputnik: What would extradition mean for the world taking into account the revelations revealed by WikiLeaks over the years?

Randy Credico: This would be a major blow to the free press. The Five Eyes, they just did it in Australia - they have done it here - they have raided a journalist’s office; just extra-judicially raided offices. This is a bad precedent. And it is being done in a Five Eyes’ country, which really are the Five Knives. I call them the Five Knives [for] doing this. They are carving up with their legal knives the Constitution of the United States.