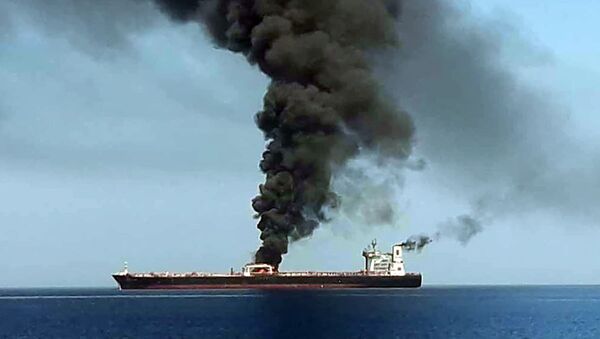 MOSCOW (Sputnik) - No pollution has been detected after two oil tankers, Front Altair and Kokuka Courageous, were hit by explosions in the Iranian waters of the Gulf of Oman on Thursday, the International Association of Independent Tanker Owners (INTERTANKO) said.

"While damage was caused to two tankers, INTERTANKO is relieved that according to preliminary reports no seafarers were killed nor pollution detected. However until such can be categorically confirmed, our first priority as an industry is the safety of those seafarers", INTERTANKO said in a statement, obtained by Sputnik.

The association went on to strongly condemn the attack for threatening both the lives of the crew and the environment.

"This is a reckless attack on innocent seafarers who are being used as pawns and proxies in response to wider conflict. These attacks could also have resulted in a major pollution incident and calm heads need to prevail. The industry is working very closely together with all stakeholders to provide operational advice and guidance", INTERTANKO’s Marine Director Dr Phillip Belcher was quoted as saying in the statement.

The reported attacks that were carried out against the vessels appear to be "well-planned and coordinated", the association underlined.

The statement comes after a spokesman for the Frontline shipping company, which is Front Altair's owner, told Sputnik that no pollution had occurred after the blast.

Russian Deputy Foreign Minister Sergey Ryabkov has already warned against hasty conclusions and attempts to blame Iran for the incident in the Gulf of Oman.

Earlier in the day, the IRNA news agency said that Iranian rescue teams saved 44 people, including Russian nationals, after the two oil tankers were hit by explosions in the Gulf of Oman. All the rescued people were taken to the Iranian port city of Jask.