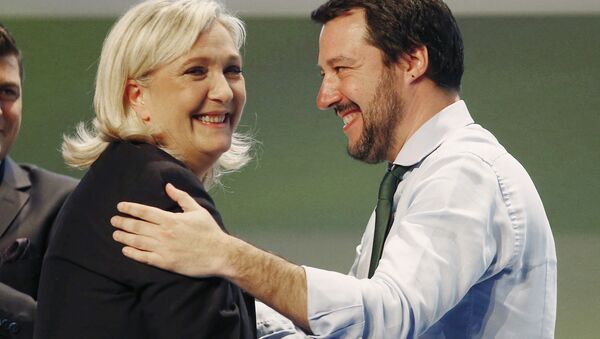 “Today we are announcing the creation of a new political group, Identity and Democracy, which will include deputies from France, Germany, Austria, Flanders, the Czech Republic, Denmark and Estonia,” said Le Pen at a joint press-conference in the European Parliament with leaders of Eurosceptic parties from other countries.

Le Pen announced they had changed the political chessboard of the European Union, referring to the Identity and Democracy group (ID), which will hold 73 of the 751 seats in the European Parliament.

The newly forged alliance is the fifth-largest grouping in the newly elected Parliament, usurping the Europe of Nations and Freedom group, which held 36 seats in the last EU legislature.

However, with Britain's Brexit Party and other Eurosceptic parties scattered across different political groups in the EU assembly, ID will not have the seats to block or hold up legislation.

Speaking to reporters in Brussels, Finns Party leader Jussi Halla-aho said although still a minority, they are now a larger minority than ever before, while Salvini's foreign affairs advisor Marco Zanni, whose League Party is one of the three biggest in the European Parliament, said they were hoping other parties like Spain's Vox would join them.

A co-leader of the AfD, Joerg Meuthen, succinctly summed up the new alliance's aims as denying the EU's expanded competencies and opposing the undermining of the nation state.

Although the centre-right European People's Party won the most seats in the European Parliament elections in May, Eurosceptic parties boasted impressive gains as they campaigned on pledges to return power to EU member states, reign in immigration and tackle the spread of Islam in Europe.

Right-wing and eurosceptic parties gained a considerable number of seats, as the Europe of Nations and Freedom group won an 22 additional  seats, to claim 58 seats, and Europe of Freedom and Direct Democracy right-wingers and eurosceptics got 54 seats, 12 seats more than in the previous elections.

000000
Popular comments
A real Euro-sceptic is someone who wants to get out of the NWO Europe, and the Euro, which is not the case for Le Pen who thinks she can reform the existing EU from within whereas she knows dam well that none of the signed treaties are negotiable, add to that her abandonment of the idea of going back to the French franc, not to mention her total submission to Israel, what sovereignty is she talking about this "National-Zionst"?