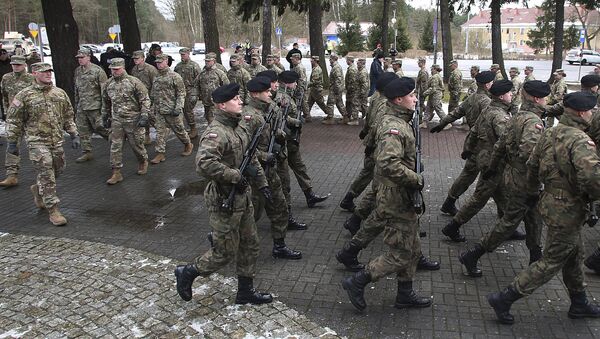 Though Poland’s “Fort Trump” may never see the light of day, reports say Warsaw will be receiving around 1,000 more US troops in the near future to combat the alleged security threat posed by Russia. However, is there an underlying economic motive at play?

Ahead of US President Donald Trump’s meeting with Polish President Andrzej Duda at the White House Wednesday, an AP report citing anonymous US officials claimed the US would deploy an additional 1,000 troops on top of the 4,500 servicemembers that already rotate in and out of Poland.

Soldiers are not the only forces expected to reach the country in the near future. A squadron of Reaper drones, as well as AEGIS Ashore missile launchers, are expected to be fully functional in the foreseeable future.

“These missile defense launchers can also be used to launch cruise missiles themselves, as the Aegis system on actual ships – this is an ashore version of that. So Russia regards that as a violation of the INF [Intermediate-Range Nuclear Forces] treaty,” international affairs and security analyst Mark Sleboda told By Any Means Necessary hosts Eugene Puryear and Sean Blackmon on Tuesday.

Sleboda went on to explain that additional troops and the potentially offensive AEGIS Ashore missiles could give NATO more leverage over Western European countries that were previously less “hawkish” toward Russia.

Puryear highlighted the US’ increased effort to prevent the Nord Stream 2 pipeline, which would go underneath the Baltic, circumventing Poland, from becoming a reality. Describing the move as an “encirclement, containment approach” from the US, he also noted that Poland is “drastically upgrading its ports to be able to bring in more liquid natural gas.”

In 2007, Russia dropped plans to expand the Yamal pipeline, which transits Poland to bring natural gas from Siberia to Germany, in favor of what became the Nord Stream 2 project. However, in recent years Moscow has shown interest in reviving that project as well, proposing an expansion in 2013.

“We have to note that Poland is overwhelmingly dependent on Russian energy to supply its country [with] gas and oil. And while they’re certainly trying to diversify away, as much as possible, with liquefied natural gas [LNG] – actually coming more from the Middle East than the US – there was a token showing from the US there,” Sleboda noted.

The international affairs and security analyst also pointed out that Nord Stream 2 would be an expansion of the existing pipeline, doubling its output of LNG.

“A considerable portion of Russian gas to Europe goes through Poland. And Poland, of course, collects transit fees for that. So, completion of Nord Stream 2 would mean, basically, less subsidization of the Polish economy through these middle-man transit fees,” Sleboda said, adding that this desire to avoid economic loss may be motivation enough for Poland to cozy up more toward the US.

“Poland might be trying to step up and prove once again that they should be the chosen partner for the US within the EU.”