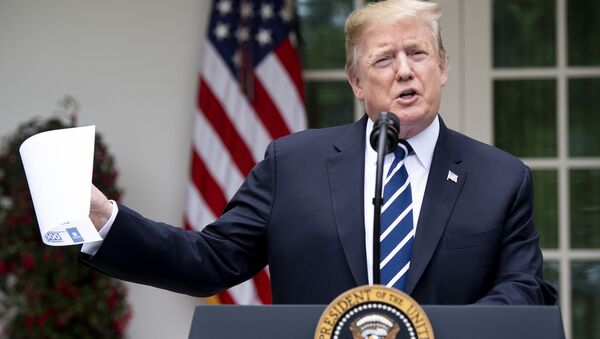 The neighbouring countries reached a deal last week and co-signed the document on June 7 2019. Mexico has reportedly promised to ramp up efforts to restrict the migrant flow towards the US in response to an ultimatum by Trump where he threatened to slap a 5 percent tariff on all Mexican goods.

President Trump said he was surprised that cameras were able to see some of the contents of a secret trade agreement between the US and Mexico.

Trump was at a press conference with Polish President Andrzej Duda when he said, "When I held it up to the sunlight and it was closed and you were able to read it through the sunlight, that was not anticipated."

"But regardless, I mean, you knew enough of what it said. I didn’t do it on purpose. But we have a lot of strength in 45 days if we decide to use that strength." Before travelling to Iowa for a series of rallies on Tuesday, Trump addressed reporters on the South Lawn of the White House and pulled the sheet of paper from his jacket pocket.

Trump Says Mexico Is Doing More for US Border Than Democrats
The president had not revealed any contents of the deal, instead stating he would let Mexico share the specifics when prepared. The suspense was cut short, however, when photos of some of the visible text began circulating online after photographers managed to snap photos of the paper made transparent by sunlight.

The Mexican government has apparently promised to "take all necessary steps under domestic law to bring the agreement into force with a view to ensuring that the agreement will enter into force within 45 days," according to a photo of the illuminated paper tweeted by Washington Post photographer Jabin Botsford, which showed some of the document's text.

Since the agreement was reached, Trump has attempted to refute claims that Mexico had in fact not agreed to any policies which it was not already planning to implement.

The specific assurances made by Mexico include a joint declaration saying that Mexico agreed to the “deployment of its National Guard throughout Mexico, giving priority to its southern border.”

However, officials have said that the Mexican government had agreed to this during secret talks in Miami between Kirstjen Nielsen, the former secretary of homeland security, and Olga Sanchez, the Mexican secretary of the interior in March.

Trump has tried to wave off this story by divulging his own secret arrangement, the details of which will be announced at a later date.

Mexican Foreign Secretary Marcelo Ebrard has denied the existence of any secret pact. "There is no other thing beyond what I have just explained," he told reporters, while pointing to the already disclosed details.

Photographers Snap Image of Trump’s Alleged Secret Deal with Mexico Exposing Some Contents (PHOTO)
Another central demand by Trump was for the enlargement of a program which keeps asylum-seekers in Mexico while their cases are reviewed. However, that centrepiece of the deal was settled in December and not a result of the recent 5 percent sanctions threat.

The contradictory statements shine a light on an apparent misalignment between the US and Mexico on what exactly had been established.

The president argued on Wednesday that the necessity for Mexico to avert tariffs and quickly reach an agreement has reinforced the bond between the two countries.

The US president thanked his Mexican counterpart for “working so long and hard” on a plan to reduce the surge of migration across the southern border. He has also claimed that Mexico is doing more to help the US resolve its migrant crisis than congressional Democrats.