Iran Does Not Intend to Start a War With Anyone, Even With US - President 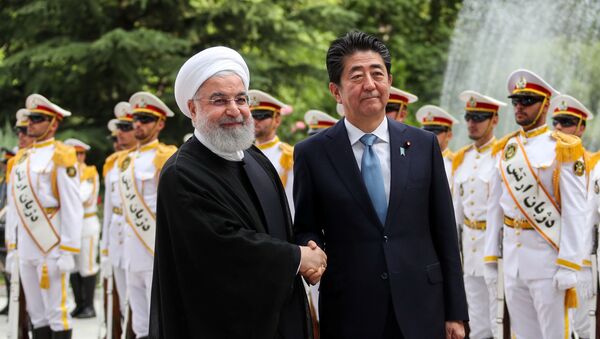 As tensions between Washington and Tehran have been rising, Iranian Foreign Minister Mohammad Javad Zarif said earlier this week that whoever starts a war with Tehran will not be the one who finishes it.

Speaking to Japanese Prime Minister Shinzo Abe, Hassan Rouhani said that Iran wouldn't start a war, but would defend itself if attacked.

"Iran will never initiate war but will give a crushing response to any regression", Rouhani told a joint news conference with Abe.

The Iranian president also noted that Tehran will remain committed to the 2015 Nuclear Deal as it's important for regional security.

"Iran will remain committed to the deal, which is important for the security of the region and the world. Tehran and Tokyo both oppose nuclear weapons ...", according to Rouhani.

The Japanese prime minister, in his turn, noted that he and Rouhani 'bluntly discussed' how to reduce Iran-US tensions.

World
Japan's Abe to Travel to Iran on Wed in Bid to Ease Tensions Between Washington, Tehran
Prior to his visit, Abe discussed the situation in Iran over the phone with Trump.

The relationship between Iran and the United States crumbled after the latter withdrew from the 2015 nuclear deal last year.

Washington has since reimposed wide-ranging sanctions on the Islamic republic in a bid to bring the country's oil exports to zero and increased its military presence in the Middle East.