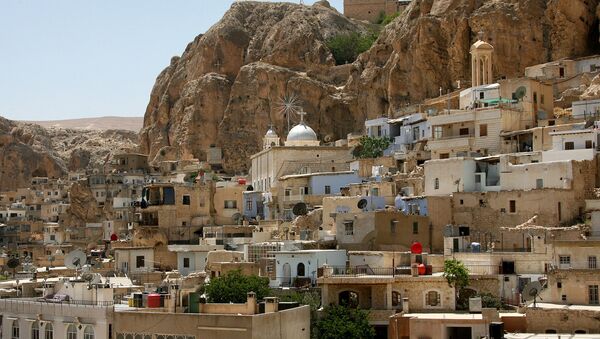 The US is ready to help Italy in Libya and on other fronts. But in return, they want to see an Italian mission in Syria, Senator Lindsey Graham told Corriere della Sera newspaper and then confirmed it officially through diplomatic channels. The author Fulvio Scaglione explained what the Americans are plans for the Middle East.

Sputnik: The United States wants to see an Italian military contingent in Syria, but Rome has yet to give the US an answer. How would you comment on this US initiative?

Over 70,000 in Syria’s Al-Hawl Camp Need Aid - UN
Fulvio Scaglione: The demands of the Americans have no practical justification. A couple of weeks ago, the Pentagon proposed and then withdrew the idea of deploying another 120,000 troops to the Middle East. The United States has military bases in 13 Middle Eastern countries, where 54,000 soldiers are stationed, their number increased by 30% from 2017 to 2018. It is obvious that Americans absolutely don't need Italian soldiers in the region.

The reason for this is purely political, the United States wants Italy to join their next project to restructure the Middle East. They justify their presence in the northeastern part of Syria two ways: the fear of the resurgence of Daesh*; and the escalation of a conflict with the Kurds to the point of an intensification of conflict between Turkey and Syria, which initially had the Kurds and the Arab militias fighting against Daesh. And the first reason is fake, because Daesh’s “return” or “non-return” doesn't depend at all on the presence of US troops in northeastern Syria, but on the Persian Gulf oil monarchies — US allies, who decide whether Daesh or Al-Qaeda will return make a come back or not. It is not clear why Italy should get into this mess.

Sputnik: Politicians in Italy now practically don't speak about the Syrian crisis at all. What should Rome do in line with its own national interests?

Militants Shell 7 Settlements in Syria's Latakia in Past 24 Hours - Russian MoD
Fulvio Scaglione: The US is now trying to establish itself again as a dominant global power, and they are doing this quite radically, confronting China, Russia, Europe, Latin America, and more recently Mexico, so they're doing it from all directions. The EU is currently experiencing economic difficulties and doesn't have a unified position on foreign policy, and in this situation, Italy cannot face the United States alone.

Sputnik: On June 9 the Italian media wrote about the death of a football player, “a symbol of revolution against Assad.” At the same time, the problem of the persecution of Christians in Syria has almost never been raised, why?

Fulvio Scaglione: This news received much more publicity than, for example, an episode when in the Idlib area, Christian teenagers became victims (were killed by a) of a rocket launched by rebels. This has been going on for seven or eight years. In my opinion, the absence of the Syrian Christian issue from Western media has been carefully planned. I write about this in my book “Syria. Christians who went to war.”

Syrian Christians constantly tried to convey to the West their vision of the situation that differs from what the politically correct West wants to see. They tried to tell us that the situation with the uprising in Syria, that also had its reasons and motivation, was not the way it was presented, and called attention to the fact that Christians are at risk of being exterminated, and the protection of Christians in the Middle East should be in the spotlight.

US Special Envoy Denies Reports Alleging Deal With Russia to End War in Syria
No one wants to admit that in “liberated” Iraq, Christians are on the verge of extinction, their numbers have fallen to less than a fifth compared to 2003, before the Anglo-American invasion.

The Syrian authorities will be criticized forever, called authoritarian and that's what is wanted, but what you really need to worry about is the religious minorities that live in the country. After 8 years of war, the number of Christians has been cut in half. And this fact is completely excluded, because it does not correspond to the West's vision of the situation.

Sputnik: How important is the issue of Christians in Syria for all of us?

Fulvio Scaglione: I think that the presence of Christians in the Middle East is a very important topic, even though there are very few of them in some places. In Syria, before the start of the war, Christians made up 10% of the population; in Egypt, they make up 10%; in Lebanon — 30%. In some countries, there are not so many Christians, but their presence plays an important role: they are unarmed, but widely represented in the life of society. For example, if Christian schools are closed in Israel or Palestine, this will lead to a crisis in the educational system in these countries. The same can be said about Syria.

Another important factor is the presence of Christians in the Middle East as a third element that ensures a balance in society: in the Middle East there are Sunni Muslims; Shiite Muslims, as well as Christians. The presence of Christians there guarantees pluralism. In countries such as Iraq, where Christians, as part of society, are practically not represented, Shiites and Sunnis confront each other, which sometimes leads to very serious conflicts.

Syria has Christian DNA. Christianity, as we know it today, first appeared in Syria. It was born in Jerusalem and Palestine, but it was in Syria that it took shape as it is in its current form.

*Daesh (ISIL/ISIS/Islamic State/IS) as well as Al-Qaeda are terrorist groups banned in Russia and a wide number of other countries.