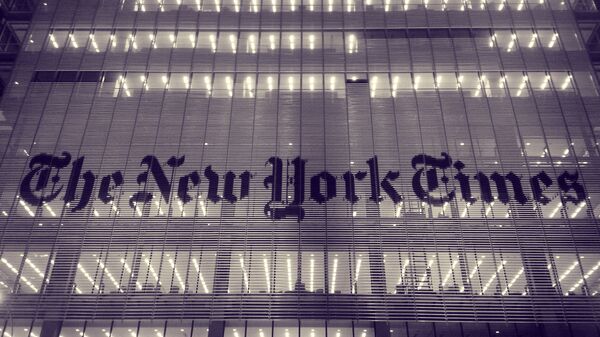 On Monday, the New York Times announced it will no longer publish daily political cartoons in its international edition, just a few weeks after receiving backlash for publishing a controversial caricature of Israeli Prime Minister Benjamin Netanyahu that was criticized as exhibiting “anti-Semitic tropes.”

"We're very grateful for and proud of the work Patrick Chappatte and Heng Kim Song have done for the international edition of The New York Times, which circulates overseas; however for well over a year we have been considering bringing that edition into line with the domestic paper by ending daily political cartoons and will do so beginning on July 1," New York Times Editorial Page Editor James Bennet said in a Monday statement, referring to two of the paper's cartoonists.

​In April, the New York Times International Edition published a cartoon depicting Netanyahu as a guide dog with a Star of David collar leading a seemingly-blind US President Donald Trump, who was wearing a kippah, a head covering worn by men in traditional Jewish communities.

​Following widespread backlash by journalists and activists who claimed the cartoon resembled Nazi propaganda, the Times issued an apology, stating that the cartoon contained "anti-Semitic tropes" and that publishing it was an "error of judgment."

​Soon after, the Times terminated its contract with the syndicated service that provided the caricature, which was created by Potuguse cartoonist Antonio Moreira Antunes. However, the Times has also now decided to end its contracts with two of its other political cartoonists, Chappatte and Heng.

In a separate statement on his website on Monday, Chappatte acknowledged his termination.

"In April 2019, a Netanyahu caricature from syndication reprinted in the international editions triggered widespread outrage, a Times apology and the termination of syndicated cartoons. Last week, my employers told me they'll be ending in-house political cartoons as well by July. I'm putting down my pen, with a sigh: that's a lot of years of work undone by a single cartoon — not even mine — that should never have run in the best newspaper of the world," Chappatte wrote.

"I'm afraid this is not just about cartoons, but about journalism and opinion in general," he added. "Maybe we should start worrying. And pushing back. Political cartoons were born with democracy. And they are challenged when freedom is."

​Chappatte was not the only one to express concern over the Times' decision. Many Twitter users likewise condemned the move.

"Terrible decision for the @nytimes to no longer run editorial cartoons. It's the most unrelenting form of journalism/critique there is. Older and more established than current reporting norms. Fire the editor who made a bad call, not the entire artform," one user wrote.

​"The @nytimes has announced they will no longer print political cartoons. They are seriously undercutting the first line of defense against tyranny," another wrote.