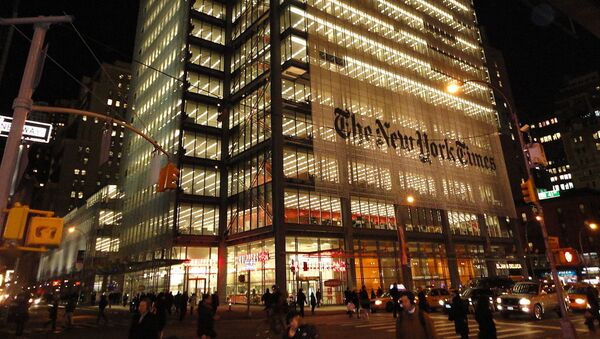 CC BY-SA 3.0 / Jleon (talk) / New York Times Building
Subscribe
Although many of the YouTubers displayed on the front page of the New York Times story both in print and online are not mentioned in the text, some readers may associate them with the much-feared “alt-right rabbit hole” which lured the hero of the story.

The New York Times has come under fire for a front-page piece describing how a YouTube user got “radicalised” by the platform’s right-wing community.

In an 8 June piece titled “The Making of a YouTube Radical”, tech columnist Kevin Roose writes that one 21-year-old West Virginia man, Caleb Cain, steered from self-help videos toward content that criticised Muslim immigrants, cultural Marxists, and feminists due to YouTube's recommendations mechanism.

The piece (which is not an op-ed) starts with a thumbnail collage of YouTube personalities like comedian Joe Rogan, clinical psychologist and self-help guru Jordan Peterson, and political commentator Dave Rubin.

As the reader scrolls down, some of the personalities disappear and the language starts to escalate, with the writing “I was brainwashed” eventually appearing over the top of the images.

Although many of the YouTubers featured in the collage are not referenced in the text and Kevin Roose does not state outright that all of them have or spread extreme views, it might seem that way to some readers.

One of the personalities, news commentator Philip DeFranco, called out the broadsheet for using his thumbnail, to which Roose replied that the collage was just a sample from Caleb Cain’s viewing history.

A buddy on the east coast just sent this to me.

They put the “Making Of A Youtube Radical” collage on the front page of the Sunday edition of the @nytimes.

Now it appears that I’m also a part of a “stew of emotional content”?

DeFranco then told Roose to speak with the NYT’s graphics department because the collage “seems to insinuate a lot”.

After that, the collage was updated with a caption explaining that it was a sample of videos Cain watched and that “many but not all of” the personalities were “far-right commentators”.

Additionally, DeFranco's thumbnail now is one of the first to disappear from the grid when the viewer scrolls down the page.

However, his photo still remained on the front page of the print edition.

“I wanna think that this is just a stupid graphics decision,” DeFranco said in a video on his channel, suggesting that this situation could become “just the beginning” of a more unsettling trend.

“Does it start with a kind of slight inclusion and insinuation here and does it escalate from there as part of what to me at times looks like a concerted effort to just take shots at YouTube?” he inquired.

SyrianGirlpartisan was another YouTuber seen in the collage screengrabs of whose videos were also displayed in the piece.

She reached out to Caleb Cain, who apparently told her that her videos did not radicalise him against Muslims.

“So basically, Kevin Roose has falsely defamed and slandered me. He didn’t ask me to comment or give me the right to response,” she said. “He’s never asked to interview me about the content of my videos or the war in Syria.”

He claimed that Dave Rubin, Ben Shapiro and Jordan Peterson had fallen victim to “smear by innuendo”.

Media believe they can use affiliative terms, vague inflammatory language & visual images to libel-by-innuendo w/o consequence, especially in headlines. In fact, libel law does not allow libel by headlines, even if the substantive portion of an article says nothing about them. 3/

A number of commenters accused the media of attacking YouTube as a potential adversary.

I see this more as Traditional media (print) once again attacking YouTube as a platform because they are threatened by it, instead of actually trying to get to the bottom of something

An attempt by the dying legacy media to smear and control its biggest rival.

What @kevinroose and the NY Times have engages in here is straight up McCarthyism, and it stinks to high heaven.

I'd sue for slander. Then again I dont know much about law.

Caleb Cain, who has, according to the piece, eventually abandoned his right-wing heroes, has spoken out on the controversy: “A lot of what I am seeing from conservatives is offence that they are classified as Alt-Right. For the record, I don’t believe Crowder or Rubin are Alt-Right. But their content kept me locked in an echo chamber which more extreme people stepped into. Exposing me to radical views.”