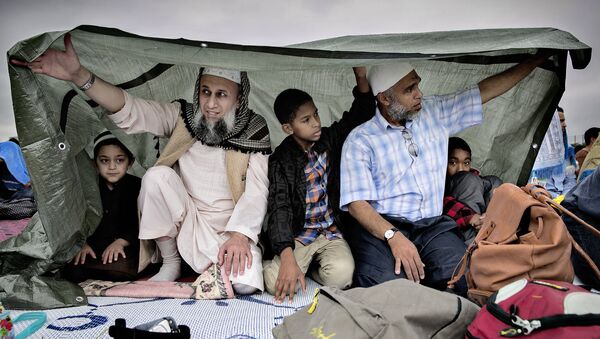 © AP Photo / Joachim Adrian, POLFOTO
Subscribe
International
India
Africa
Left-of-the-centre parties have come to dominate politics in blighted areas of Denmark, due to the successful mobilisation campaigns carried out by Danish Muslims; many, however, contend that this represents a challenge to democracy.

Urban districts that are included in the Danish government's “ghetto list” have seen the organised mobilisation of the areas' Muslim residents to vote for certain parties and candidates, the newspaper Jyllands-Posten reported.

“Different associations have joined together: Pakistanis, Arabs and Turks. Fortunately, was still Ramadan, so we met in mosques every day. Lastly, we have been working to get people mobilised to vote for specific candidates. It's been successful,” Kasim Ahmad, a former spokesman for the Islamic Society, told Jyllands-Posten.

For instance, in the Gellerup district of Aarhus, Denmark's second-largest city, an electoral group was set up, which in co-operation with a mosque and various associations advised people to vote for the Social Liberals and the Red-Green Coalition.

In Gellerup alone, where about 80 percent of the population are immigrants and their descendants, support for the Social Liberals rose from merely 5.1 percent in 2015 to a whopping 34.2 percent in 2019. The same trend was seen in Vollsmose, Tingbjerg and in Nørrebro, also present on the “ghetto list”, where the Red-Green Alliance also performed strongly.

“This worries me, because it testifies that there is no separation of powers, but an association that does not take place on political grounds, but the premises of Islam. It can affect the very basic uniformity we have in Danish society,” debater and high school teacher Søren Hviid Pedersen, who holds a a PhD in political theory, told Jyllands-Posten.

Pastor Sørine Gotfredsen was also unimpressed by the “Muslim mobilisation”.

“With this type of mobilisation, when you go so far as to recommend a particular party, the parallel state goes from being introverted and hemmed in to being an integral feature of society. The parallel state takes a step further into the struggle over what Denmark is all about,” Gotfredsen mused.

However, religion scholar and sociologist Brian Arly Jacobsen at the University of Copenhagen does not believe that one should hold imams accountable. Nor does he think that there is something inherently wrong with Muslims organising themselves in to special election groups.

“In a democracy, it is a legal argument they have made, and from this perspective, I don't think they have mobilised themselves on the basis of certain interests. There are even other community groups that do so”, Jacobsen said.

Nor did Rabih Azad-Ahmad, the Social Liberals' representative in Aarhus, see any problem. On the contrary, he welcomed the idea that residents of Gellerup and other places of exclusion “embrace democracy”.

As of 2018, 29 Danish residential areas met the revised ghetto criteria.

In the 2019 general election, the left-of-the-centre parties constituting the “red” bloc made a significant advance, with the Social Democrats emerging as a winner with 25.9 percent of the vote and the Social Liberals stunning analysts by nearly doubling its result to 7.7 percent.

Experience from other Scandinavian countries indicates that immigrants and Muslims tend to vote for the left-of-the-centre parties, which generally favour immigration and are more generous in terms of social benefits. In Sweden, Muslim voters are known to heavily favour the ruling Social Democrats and their allies. According to political scientist Magnus Hagevi of Linnaeus University, in Växjö, up to 75 percent of Muslims sympathise with the red-green bloc.