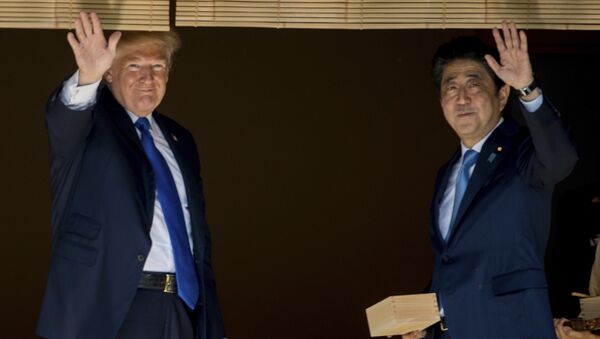 TOKYO (Sputnik) - Japanese Prime Minister Shinzo Abe has held a phone conversation with US President Donald Trump on the situation in the Middle East ahead of Abe's visit to Iran, NHK broadcaster reported on Tuesday.

The details of the conversation have not been made public, but according to the NHK broadcaster, the Japanese prime minister may have told the US leader about his plans to raise the issue of tensions in the region with Iran's Supreme Leader Ayatollah Seyed Ali Khamenei and try to convince Tehran to de-escalate the situation.

The two leaders also reaffirmed their commitment to closely cooperate in order to have a successful G20 Summit in Japan's Osaka in late June, the broadcaster added.

Iran's Zarif Calls for 'Elimination' of Dollar to Stop US 'Economic Terrorism'
Abe's visit to Iran will come just over two weeks after the end of Trump's trip to Japan and talks with the Japanese prime minister, which has prompted speculation in the media that Abe might act as an intermediary between Tehran and Washington, and might bring a message from Trump to Iran.

Abe is set to start his three-day visit to Iran on Wednesday and is expected to hold meetings with Iranian President Hassan Rouhani as well as other senior officials. This visit will become the first such trip of a Japanese prime minister to Iran in over four decades.