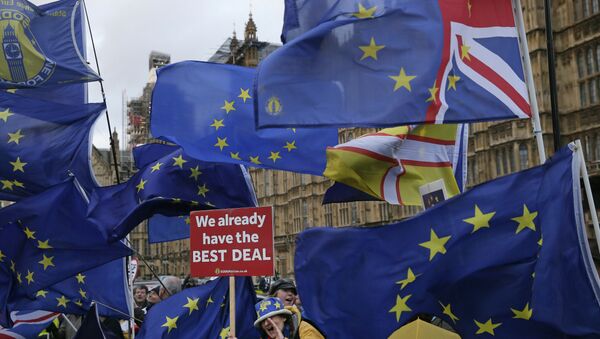 Brussels has previously said that it would not renegotiate the Brexit deal it reached with May last year or discuss a future trade deal with the United Kingdom without a divorce payment.

Germany's Europe Minister Michael Roth stressed on Tuesday in an interview with Reuters that the EU will not be prepared to renegotiate the previously hammered out Brexit agreement no matter who becomes the new British prime minister.

"The EU and its member states cannot be blackmailed," the German minister said. "I see no willingness to restart negotiations from the beginning. The candidates would do well to bear that in mind in the course of their internal party campaigns."

Michael Roth also emphasised that the potential successors of outgoing Prime Minister Theresa May should keep that in mind while campaigning as they have pledged to get better conditions for the UK divorce from the EU.

Meanwhile, the German minister's views have been echoed by a European Commission spokesman who noted that a new UK prime minister won't alter the Brexit agreement that was reached earlier.

The day before, the Conservative Private Members' Committee confirmed that a total of 10 candidates are running for the leadership of the UK Conservative Party and the office of the prime minister. Political experts and bookmakers consider ex-foreign secretary Boris Johnson, Secretary of State for Environment, Food and Rural Affairs Michael Gove, former secretary of state for exiting the European Union Dominic Raab and Secretary of State for Foreign and Commonwealth Affairs Jeremy Hunt to be the most likely winners of the race.

'Mother Of All Disasters': Ex-Minister Brands Cameron as Worst PM For Brexit
The UK political landscape has been heavily impacted by the Brexit deadlock, with the historically two strongest parties bleeding support.

UK Prime Theresa May has recently stepped down as the Conservative Party leader after failing to achieve a consensus in parliament and within her own party over the country's withdrawal from the European Union. She will remain a caretaker prime minister until her party elects a new leader in July.