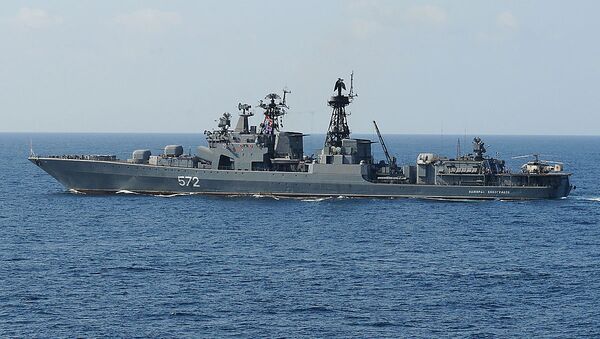 On 7 June the Russian Pacific Fleet stated that a US Navy cruiser, the USS Chancellorsville, had suddenly changed course and crossed the path of the Russian destroyer Admiral Vinogradov “just 50 meters away from the ship” in a dangerous near-collision manoeuvre in the East China Sea.

“Not war times!” was the response of a Russian admiral to the sangfroid attitude of Russian naval servicemen who were able to stay calm in the face of a potentially disastrous run-in with a US naval cruiser.

Former chief of staff of the Russian Navy (1991-1996), Admiral Valentin Selivanov spoke to the Russian media, giving his assessment of the actions of the crew members of the Russian anti-submarine ship Admiral Vinogradov during the dangerous near-collision incident with the USS Chancellorsville cruiser in the East China Sea.

“There is a time for war, and a time for sunbathing,” responded the Admiral.

‘Deadly Serious’: Near-Misses Between US, Russian Ships No Accident, and No Joke
“The East China Sea. Our vessel is on the move in the open sea. …The seamen and officers have had lunch. They are on their after-lunch break, glad to be serving in the south.”

After all, claims the Admiral, they are not at war.

“Sure, if one was sunbathing, then dozens were.”

“And yes, you have to be undressed to sunbathe.”

According to Selivanov, a part of the crew is justified in taking a break and resting while the vessel is en route. After all, these are not times of war, summed up Admiral Valentin Selivanov.

Kind of indicates that this was not intentional but a crossing situation nearly gone bad.

Side note: Russian sailors seem to be having a good time aboard https://t.co/KWFuDuOnWn pic.twitter.com/nltEvkawPP

The first video of the encounter between the Russian Udaloy-class destroyer Admiral Vinogradov and the USS Chancellorsville cruiser appeared online on 7 June.

The footage shows what appeared to be several Russian sailors sunbathing on the destroyer's helicopter pad amid what was called an “unsafe approach” by the US Navy that nearly resulted in a collision.

The sailors, however, seemed quite composed, as one of them looked like he was relaxing in a sun lounger naked while two others were working on their tans shirtless.

Viral
'Just Chilling': Netizens Amazed by Russian Sailors 'Sunbathing' Amid Near Collision With US Warship
On the morning of 7 June the Russian Pacific Fleet stated that the US Navy cruiser USS Chancellorsville had suddenly changed course and crossed the path of the Russian destroyer Admiral Vinogradov “just 50 metres away from the ship”, forcing the Russian vessel to carry out a risky near-collision manoeuvre in the East China Sea.

Subsequently both sides blamed each other for causing the potentially dangerous situation at sea.

The US Seventh Fleet denied Russia’s version of events, blaming the Russian vessel for nearly causing a collision.