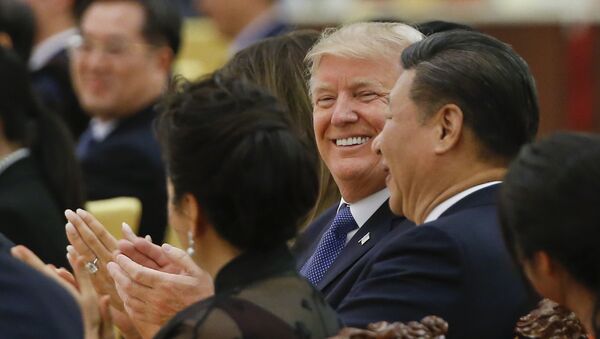 Earlier, the United States delayed the imposition of its 25 per cent tariffs on Chinese imports from 1 June to 15 June, according to a notice from the Office of the US Trade Representative (USTR) published in the Federal Register last week.

US President Donald Trump has addressed the issue of the trade row with China in an interview with CNBC broadcaster on Monday noting that the Asian superpower has been devaluing its currency, and "something has to be done" about this.

He explained that the currency devaluation could be potentially creating an uneven playing field.

Commenting on the potential deal with Beijing, Trump expressed his belief that China will make a trade deal with the US because Chinese authorities need to do so.

In addition, he spoke about the forthcoming G20 meeting, stressing that if Chinese President Xi Jinping does not meet the US leader at the event, tariffs on $300 billion worth of Chinese goods will become immediately effective.

Trump also mentioned Asian tech giant Huawei, emphasising that it could be part of a trade agreement between Washington and Beijing.

Xi Jinping Calls Trump His Friend, Says US Leader Does Not Want to Sever Ties With China
The remark comes at a time when White House has been lobbying its European allies against granting Huawei access to its networks, claiming the Chinese government wields significant control over the company, despite its denials. Huawei, for its part, has repeatedly rejected the US accusations that it installs "backdoor" access to its devices at the behest of the Chinese government to help Beijing spy on users.

On 1 June, China’s tit-for-tat tariffs on $60 billion worth of US imports came into effect. A day later, the Chinese government released a white paper, saying that cooperation in trade was the only right choice for Washington and Beijing, while the confrontation could only harm both sides.

In May, Trump increased the level of tariffs from 10 per cent to 25 per cent on about $200 billion worth of Chinese imports. He also ordered tariffs to be raised on all remaining US imports from China, which are valued at around $300 billion.

The trade dispute between the world’s two biggest economies has been escalating for over a year now. Both the United States and China repeatedly slapped billions of dollars’ worth of retaliatory tariffs on one another as the rivalry between the powers intensified.