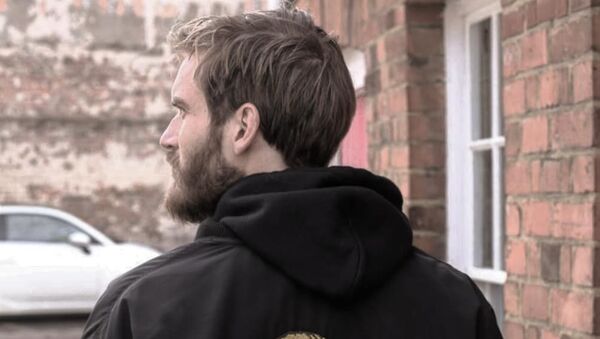 The popular Swedish YouTuber explained the potential effects that these revised “hate speech” community guidelines would have on defining what kind of content is deemed admissible on the platform.

Felix said that he was concerned about the impact the move would have on other creators, after giving his followers a breakdown of the latest updates to Steven Crowder’s channel, which was demonetised for a “pattern of egregious actions, which harmed the LGBTQ community”.

“I think what really matters here is the effect,” PewDiePie explained, “there’s definitely even tighter restrictions here on YouTube.”
Pewds gave a graphic example of a history channel, featuring clips on Nazi policy and propaganda speeches by Nazi leaders, getting banned for “hate speech”.

PewDiePie then referred to the case of Steven Crowder and Carlos Maza, and said he found the new policies to be bizarre as they're based on the broader impact on the community rather than individual actions.

“It’s not about who’s right or wrong, it’s about who makes the most noise,” said the YouTuber.
“I don’t agree with Steven's comments about it, but it's so bizarre to me how it's not about what policies it is.”

Crowder hosts Louder With Crowder, a political commentary show airing on Blaze TV, a broadcast network with cable, satellite, and streaming content. Maza insists Crowder has targeted him personally because of his race and sexual orientation.

Maza is the host of Vox’s YouTube series Strikethrough.

For the past two years, Maza said on Twitter, Crowder has regularly mocked him for being gay and Latino, with the fallout being that Crowder’s followers have harassed Maza and invaded his privacy.

Maza voiced his concerns publicly on 30 May, illustrating Crowder’s behaviour through a compilation of video clips, which he shared on Twitter.

YouTube responded to Maza publicly in a series of tweets on 4 June, stating the company disagreed with Maza’s assessment of Crowder’s behaviour, arguing that Crowder’s language isn’t harassment since it’s embedded within a larger political debate.

YouTube subsequently penalised Crowder for a “pattern of egregious actions”.

YouTube’s official position regarding Crowder has implications for YouTube’s diverse communities, especially those consisting of marginalised creators who are often subject to abuse.

YouTube is one of several platforms which have attracted criticism for their vague hate speech rules.

However, following the backlash over the Mazda-Crowder scandal, YouTube announced that they would be revising some of their policies regarding hate speech, much to the concern of many YouTubers after channels began to get demonetised on the platform.

000000
Popular comments
Fascists will be just that fascists, until we the people kick them out on a global scale, we will continue to slip into tyranny.

Dungeon Ambassador from Terra
10 June 2019, 15:10 GMT1
000000
Newsfeed
0
New firstOld first
loader
LIVE
Заголовок открываемого материала
Access to the chat has been blocked for violating the rules . You will be able to participate again through:∞. If you do not agree with the blocking, please use the feedback form
The discussion is closed. You can participate in the discussion within 24 hours after the publication of the article.
To participate in the discussion
log in or register
loader
Chats
Заголовок открываемого материала
Worldwide
InternationalEnglishEnglishMundoEspañolSpanish
Europe
DeutschlandDeutschGermanFranceFrançaisFrenchΕλλάδαΕλληνικάGreekItaliaItalianoItalianČeská republikaČeštinaCzechPolskaPolskiPolishСрбиjаСрпскиSerbianLatvijaLatviešuLatvianLietuvaLietuviųLithuanianMoldovaMoldoveneascăMoldavianБеларусьБеларускiBelarusian
Transcaucasia
ԱրմենիաՀայերենArmenianАҧсныАҧсышәалаAbkhazХуссар ИрыстонИронауОssetianსაქართველოქართულიGeorgianAzərbaycanАzərbaycancaAzerbaijani
Middle East
Sputnik عربيArabicArabicTürkiyeTürkçeTurkishSputnik ایرانPersianPersianSputnik افغانستانDariDari
Central Asia
ҚазақстанҚазақ тіліKazakhКыргызстанКыргызчаKyrgyzOʻzbekistonЎзбекчаUzbekТоҷикистонТоҷикӣTajik
East & Southeast Asia
Việt NamTiếng ViệtVietnamese日本日本語Japanese俄罗斯卫星通讯社中文（简体）Chinese (simplified)俄罗斯卫星通讯社中文（繁体）Chinese (traditional)
South America
BrasilPortuguêsPortuguese
NewsfeedBreaking
13:20 GMTMali to Explore New Security Partnerships As France Ends Sahel Operation
13:18 GMTMerkel's Successor Laschet Reveals His Vote Preference in Election Blunder
13:11 GMTWomen to Dominate Iceland's Parliament for First Time Ever, Reports Suggest
13:09 GMTBlast Kills Taliban Intelligence Officer in Eastern Afghanistan, Source Says
13:00 GMTGermans Head to Polls to Choose New Bundestag
12:51 GMTDozens of New Yorkers Stage Anti-Vaccine Protest at a Food Court Chanting F**k Joe Biden
12:41 GMTFour Inmates Dead, One Injured in Attempted Jailbreak in Philippines, Reports Suggest
12:40 GMTVirginia Giuffre to Reportedly Hand Prince Andrew Secret Doc Able to Defeat Her Lawsuit
12:37 GMTRussia Scrambles Three Su-35 Jets to Escort US B-52 Bomber Approaching Border in Pacific Ocean
12:32 GMTCyclone Gulab Likely to Make Landfall in India on Sunday Evening
12:21 GMTUN Chief Warns 'Humanity Unacceptably Close to Nuclear Annihilation'
12:09 GMTKremlin Says It Hopes for Consistency on Minsk Agreements From Germany After Merkel Leaves
12:02 GMTRussian Presidential Spokesman Says Gazprom Fulfilling All Obligations
11:54 GMTLabour Leader Says It's 'Not Right' to Say Only Women Have a Cervix
11:43 GMT'F**k Them': Carlson Responds to Yet Another Call to Fire Him Over 'Great Replacement' Theory
11:42 GMT'Piece of Scum': UK Labour Deputy Leader Lashes Out at Tories
11:14 GMTUK Transport Minister Calls on Britons to Behave Normally, Says There is No Shortage of Fuel
11:12 GMTHamas Has No Place in Sudan But Will It Give Up on Former 'Base'?
11:05 GMTJapan Should Look Into Having Nuclear Submarines, Candidate for Ruling Party Head Says
11:05 GMTIsraeli Soldiers Shoot Down Nazi Flag Raised Near Outpost in West Bank - Photo, Video