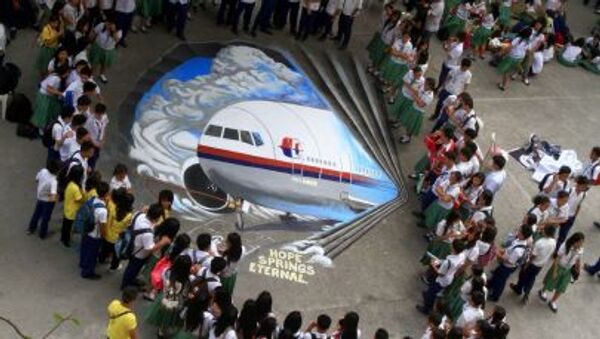 © East News / Xinhua News/Rouelle Umali
Subscribe
The incident could have been caused by a technical failure or human misconduct, or a combination of both, but a conclusive understanding about what happened to flight MH370 is as far along as it was five years ago.

A lack of clarity over what went wrong on Malaysia Airlines flight MH370 could mean that any aircraft could be vulnerable, an aviation expert has claimed.

"This accident may apply to other aircraft or it may have been an engineering repair job which has been done incorrectly and may also affect other makes of aircraft," Alastair Rosenschein, a pilot-turned-aviation consultant, said in Channel 5's documentary 'Flight MH370'.

"So it is vital that one tries one's hardest to get to get to the bottom of it," he added.

Rosenschein had already suggested in 2017 that the most likely reason for the MH370 tragedy was the explosion of an oxygen tank.

He theorised that it could have depressurised the plane and incapacitated the pilots, who started flying back but passed out before they could land the Boeing in Malaysia.

Rosenschein claimed that the plane had actually flown above Kuala Lumpur on its supposed way back, but that the military failed to notice the aircraft and then lied that it vanished from radars due to a disabled transponder.

The fateful Boeing, bound for Beijing, disappeared on 8 March 2014 as it was supposed to be handed over from Malaysian air traffic controllers to Vietnamese airspace.

Satellite data analysis showed that the plane made a leftward detour over the South China Sea and flew out of radar range toward the southern Indian Ocean.

The most popular theory is that it flew on autopilot until it eventually ran out of fuel and crashed somewhere in the ocean. However, an Australian-led search for the missing plane − the most expensive in aviation history − and a separate search by a US-based firm have yielded no results.

In July 2018, a final report by Malaysian investigators stated that all the evidence was pointing to the plane being under manual control, and that it was deliberately flown off course to its demise.

At the same time, they failed to reveal what caused the plane's disappearance, suggesting that third-party interference may have been the case.

000000
Popular comments
"This accident may apply to other aircraft" - There is no indication that this was an accident. You need a deliberate act to hide a passenger plane for more than 5 years, and I don't believe the pilot was the guilty part.
Norwegian
10 June 2019, 13:04 GMT1
000000
NoriT, Agreed. Diego Garcia is the likely destination. I remember the reports you mention.
Norwegian
10 June 2019, 15:23 GMT
000000
Newsfeed
0
New firstOld first
loader
LIVE
Заголовок открываемого материала
Access to the chat has been blocked for violating the rules . You will be able to participate again through:∞. If you do not agree with the blocking, please use the feedback form
The discussion is closed. You can participate in the discussion within 24 hours after the publication of the article.
To participate in the discussion
log in or register
loader
Chats
Заголовок открываемого материала
Worldwide
InternationalEnglishEnglishMundoEspañolSpanish
Europe
DeutschlandDeutschGermanFranceFrançaisFrenchΕλλάδαΕλληνικάGreekItaliaItalianoItalianČeská republikaČeštinaCzechPolskaPolskiPolishСрбиjаСрпскиSerbianLatvijaLatviešuLatvianLietuvaLietuviųLithuanianMoldovaMoldoveneascăMoldavianБеларусьБеларускiBelarusian
Transcaucasia
ԱրմենիաՀայերենArmenianАҧсныАҧсышәалаAbkhazХуссар ИрыстонИронауОssetianსაქართველოქართულიGeorgianAzərbaycanАzərbaycancaAzerbaijani
Middle East
Sputnik عربيArabicArabicTürkiyeTürkçeTurkishSputnik ایرانPersianPersianSputnik افغانستانDariDari
Central Asia
ҚазақстанҚазақ тіліKazakhКыргызстанКыргызчаKyrgyzOʻzbekistonЎзбекчаUzbekТоҷикистонТоҷикӣTajik
East & Southeast Asia
Việt NamTiếng ViệtVietnamese日本日本語Japanese中国中文Chinese
South America
BrasilPortuguêsPortuguese
NewsfeedBreaking
00:19 GMTEverything You Need to Know Before the Astros and Braves Face Off in the World Series
YesterdayUS Pauses Delivery of $700 Million in Emergency Economic Aid to Sudan
Yesterday‘News Black Hole’: A Year of War Shows Why UN Needs to Monitor Human Rights in Western Sahara
YesterdayUS, UK Condemn Military Coup in Sudan, Vow to Back Democratic Civilian Government
YesterdayInternal Documents Show Facebook Knew it Was Used to Incite Violence in Ethiopia
Yesterday'Wild $T1mes!': Musk Rejoices as Tesla's Value Surpasses $1 Trln Following Hertz's 100,000-Car Order
YesterdayRussian Sailors Saved Panama-Flagged Ship From Pirates in Gulf of Guinea- Defense Ministry
YesterdaySlump in UK COVID-19 Cases Undermines Calls for ‘Plan B’ Lockdown - Epidemiologist
YesterdayMultiple Injuries Reported in Idaho Mall Shooting, One Person in Custody - Police Dept.
YesterdayFacebook, Instagram Delete Video of Brazilian President Linking COVID-19 Vaccines to AIDS
YesterdayEuropean Regulator Approves Booster Dose of Moderna Vaccine
YesterdayUS Very Supportive of EU's Engagement in Iran Nuclear Deal - State Dept.
YesterdayUpdated US Hate Crime Data for 2020 Shows Highest Incident Levels Since 2001 - FBI
YesterdayChinese FM Wang Yi to Meet Afghan Taliban Leaders in Qatar for First High-Level Talks
YesterdayJFK's Nephews Slam Biden Administration After Postponing Assasinaton Records
YesterdayUS Has No Issue With Russia-China Military Drills in Indo-Pacific Region - Pentagon
YesterdayTory MP Says Gender Self-Identification is a Threat to Women’s Rights
YesterdayYellen Appoints Counselor to Promote Racial Equity - US Treasury Dept.
YesterdayAfter Cricket Player Shami Gets Trolled, Indian Parliamentarian Says It Is 'Hatred Against Muslims'
YesterdayLavrov on Russia-NATO Relations: Cannot Catastrophic Because They Do Not Exist