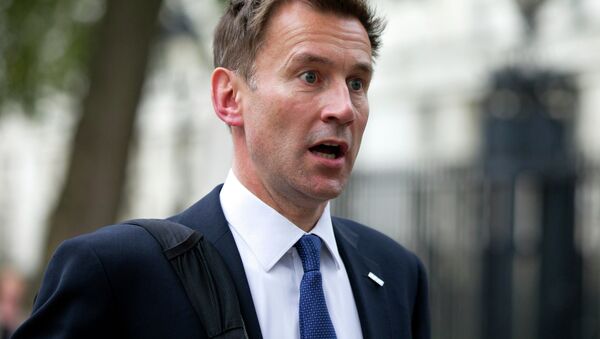 As eleven Conservative MPs vie to replace Theresa May as Conservative party leader and, subsequently, prime minister, they have been outlining their Brexit strategies before nominations close at 17:00 BST on Monday.

The foreign secretary said he had spoken to the German chancellor on the sidelines of D-day commemorations last week and Merkel had indicated that the EU was “willing to negotiate on the package” if the new prime minister had the “right approach”.

Speaking to Sky’s Ridge on Sunday programme, Hunt said Merkel had told him Brussels “would look at any solutions” to solve the Irish border issue that the UK suggested.

“I'm absolutely clear that, if we take the right approach to this, the Europeans would be willing to negotiate on the package.”
“She said, of course, with a new British prime minister we would look at any solutions.”

According to Hunt, European leaders might be amenable to reworking the deal once a new leader has been installed, despite EU boss Michel Barnier insisting the Brexit deal can't be reopened under a new PM.

Jeremy Hunt Aims to Label Jeremy Corbyn as Extremist - Journalist
Jeremy Hunt, who is running to be the next PM after Theresa May officially quit as Tory leader on Friday, said the Irish backstop was “clearly not acceptable to Parliament” and he would push a technology-based solution to the Irish border.

“I think that's doable,” he insisted.

“We need to find structures that reassure people this is deliverable.”

Hunt insisted he had done deals all his life and knew how to approach them.

“I have those skills to deliver a deal.”

Going too hard would only get Britain “one step closer to a general election”, he added, in a reference to rival candidate Boris Johnson.

The former London mayor and UK foreign secretary insisted he would hold back the £39 billion divorce bill until better terms are offered, vowing to get ready to leave the EU without a deal in October, if the UK couldn't get what it sought.

Brexiteer Esther McVey also refused to rule out stopping Parliament in order to force through a No Deal Brexit – something that hard Brexit-backing Dominic Raab sparked a backlash over when he suggested it last week.

McVey told the Andrew Marr Show earlier: “That wouldn't be my priority, I wouldn't be looking to do that, no, what I've said is we would use all the tools at our disposal.”

The former work and pensions secretary accused rivals of “tearing up 400 years of history” by trying to stop Brexit.

Another party leadership hopeful, Environment Secretary Michael Gove, said MPs who had voted to start Brexit talks by triggering Article 50 should respect the result of the vote to leave the EU.

However, halting Parliament would be “wrong” and contradict “the best traditions of British democracy”.

Tories 'Finished': Theresa May's Successor Will Struggle to Deliver Brexit - UK Politician
Tory leadership candidates have clashed over whether they would shut down Parliament early to force through a no-deal Brexit, as eleven MP are vying to replace Theresa May as party leader and, subsequently, prime minister. The candidates have been outlining their policies on Brexit and other issues before nominations close at 17:00 BST on Monday. They require eight MPs to back them or stand to be eliminated from the contest.
Newsfeed
0
Access to the chat has been blocked for violating the rules . You will be able to participate again through:∞. If you do not agree with the blocking, please use the feedback form
The discussion is closed. You can participate in the discussion within 24 hours after the publication of the article.
To participate in the discussion
log in or register
loader
Chats
Заголовок открываемого материала