In Leaked Tape, Pompeo Vows to 'Push Back' Against UK's Jeremy Corbyn 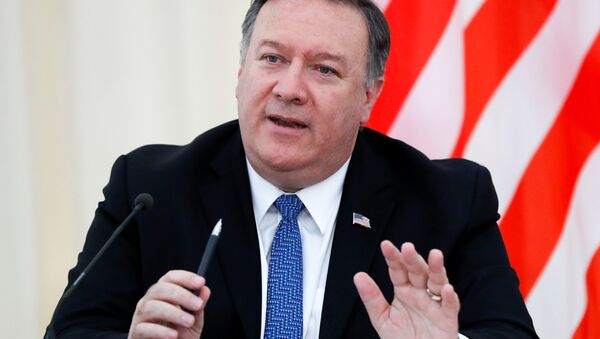 US President Donald Trump’s administration has been foraying into British politics; last week, during his UK visit, Trump praised Boris Johnson, lauding him as an acceptable successor to Theresa May, while snubbing Jeremy Corbyn, calling the Labour leader a negative force.

US State Secretary Mike Pompeo has been accused of trying to stop the UK’s Labour Party leader Jeremy Corbyn from becoming prime minister; an audio clip leaked to the Washington Post featured him reassuring Jewish leaders that he would “push back” against the Labour party’s leadership after continued allegations of anti-Semitism within its fold.

In the leaked recording, Mike Pompeo was apparently asked what he would do if Jeremy Corbyn were elected prime minister.
The questioner asked: “Would you be willing to work with us to take on actions if life becomes very difficult for Jews in the UK?”
In the response, Mike Pompeo appears to suggest he would seek a pre-emptive push back before Labour leader Jeremy Corbyn had an opportunity to claim the prime minister’s seat.

“It could be that Mr. Corbyn manages to run the gauntlet and get elected,” he said in the audio clip.
“It’s possible. You should know, we won’t wait for him to do those things to begin to push back. We will do our level best. It’s too risky and too important and too hard once it’s already happened.”

Peterborough Result Reinforces Reality of Corbyn Threat
In response to Pompeo’s comments, a Labour spokesman rejected accusations of anti-Semitism and condemned US President Donald Trump and his senior officials for wading into British domestic politics.

“President Trump and his officials’ attempts to decide who will be Britain’s next prime minister are an entirely unacceptable interference in the UK’s democracy,” said the spokesperson.

He added that the party was “fully committed to the support, defence and celebration of the Jewish community and is implacably opposed to antisemitism in any form”.

Mike Pompeo’s comments are the latest example of a glaring intervention by the Trump administration in British politics.

Last week, during a visit to Britain, Donald Trump had praise for Boris Johnson, saying the former Foreign Secretary would be an "excellent" successor to Theresa May.

The US President also snubbed Jeremy Corbyn during his trip to London, calling the Labour leader a negative force.

During a press conference with Theresa May Trump had said:

“He wanted to meet, today or tomorrow, I decided I would not do that.”

“I don't know Jeremy Corbyn, I've never met him, never spoke to him,”

“I think that he is, from where I come from, somewhat of a negative force.”

The UK Labour Party has been embroiled in a crisis since 2016 which has seen senior MPs accused of engaging in anti-Semitism. Leader Jeremy Corbyn established the Chakrabati inquiry in 2016 to investigate the state of racism within the party’s ranks.

Now, the Equality and Human Rights Commission announced last week that it is to formally investigate Labour over anti-Jewish racism.