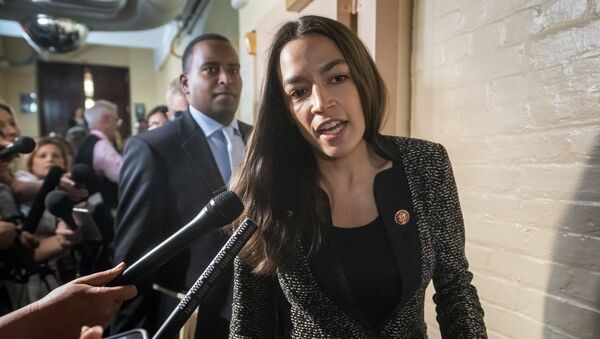 Nahro al-Kasnazan, an Iraqi sheikh who recently registered several companies in the US, has openly admitted that he advocates for a “military confrontation” between the United States and Iran, and that he considers himself a viable Iraqi presidential candidate.

As tensions between Washington and Tehran continue to escalate, Rep. Alexandria Ocasio-Cortez wondered aloud whether someone powerful and influential might be seeking to sway US President Donald Trump’s opinion in order to make the United States wage a war on Iran.

The congresswoman posted her musings on social media along with a link to a tweet by Washington Post reporter David Fahrenthold which contains a link to an article he co-authored, about a wealthy Iraqi sheikh “who urges a hard-line US approach to Iran” spending some 26 nights in an expensive suite in Trump’s DC hotel.

Sure looks like powerful people are trying to bribe the President into war. https://t.co/e4L4YcrGKp

According to the newspaper, the sheikh, Nahro al-Kasnazan, who recently registered several companies in the US “to provide private security, oil field services and construction”, has openly admitted that he is “advocating for a U.S. military confrontation with Iran and wants US help to blunt Iranian influence in Iraq”, not to mention that he “considers himself a viable candidate to become president of Iraq”.

The sheikh also pointed out that he wants "surgical US military strikes" against targets in Iran rather than a full-scale invasion.

"Any retreat from Bolton's policy on Iran will lead to a breaking down of America's reputation in front of the world”, he said.

UN Nuclear Watchdog Says Iran Steps Up Enriched Uranium Production
Relations between the United States and Iran took a turn for the worse last month after Washington scrapped sanctions waivers for over half a dozen major importers of Iranian oil and moved a carrier strike group, strategic bombers and Patriot air defence batteries into the Middle East.

This development came about a year after the US unilaterally withdrew from the Joint Comprehensive Plan of Action deal in May 2018 and reinstated stringent sanctions against Iran.

On the one-year anniversary of the withdrawal, Iran warned that it may pull out from the deal and resume nuclear enrichment beyond purposes necessary for its peaceful nuclear programme unless its other signatories can find ways to deal with the impact of the stringent US sanctions.