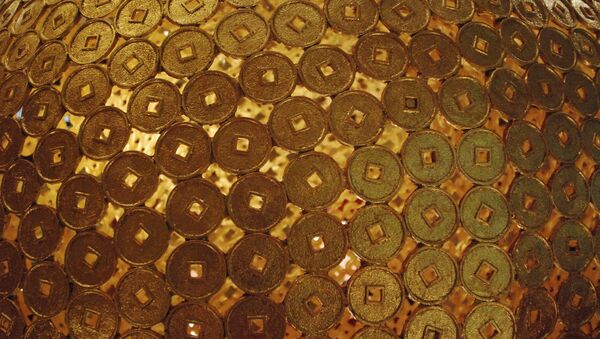 Net purchases of gold by central banks across the globe have spiked in the first quarter of 2019, surging by a whopping 68 per cent compared to this time last year, according to World Gold Council data.

China's record-setting purchase of gold bullion continued its climb in May, growing by some 15.86 tonnes to over 61.61 million ounces total, fresh data from the People's Bank of China cited by Xinhua has revealed.

The purchase marked the sixth straight month of Beijing's gold-buying spree, with China adding previously nearly 58 tonnes of the precious metal to its coffers amid concerns over the escalating trade conflict with the US.

The new gold, worth an estimated $1.48 billion, led the country's dollar-equivalent gold reserves climb to $79.83 billion in May, up from $78.35 billion a month earlier.

Russia Largest Buyer of GOLD in the World in Q1 2019, China Second
Speaking to Bloomberg, Argonaut Securities (Asia) Ltd. Analyst Helen Lau said the move to gold was a reflection of Beijing's "determined diversification" away from dollar assets. Lau estimates that China may buy as much as 150 tonnes of gold before the year is through.

Gold prices took a tumble in US Monday trading amid an increased appetite for risk among investors. The dip to $1,330.50 an ounce followed Friday's spike to $1,348.31 per ounce, its highest level since April 2018. Gold prices are up nearly 5 percent so far in 2019, with Indian consumption expected to boost prices further.

China's gold holdings, the sixth largest in the world after the US, Germany, Italy, France and Russia, are relatively small compared to the overall size of the economic superpower's assets.  According to central bank figures, China's foreign exchange reserves stood at a whopping $3.1 trillion, by far the largest in the world, in May.

Last month, figures from the World Gold Council revealed that Russia bought some 55.3 tonnes of gold in the first quarter of 2019, with China securing 33 tonnes of the metal during the same period. India, Serbia, the Philippines, Hungary, Poland and other countries have joined the club of sovereign buyers, with some of these nations taking the measure amid plans by their central banks to reduce dependence on the US dollar.

Trump: If China's Xi Jinping Fails to Attend G20, Fresh Tariffs to Come Into Effect Immediately
The United States has the world's largest gold holdings, with 8,133.5 tonnes of the precious metal said to be stored away in its vaults. With 3,369.7 tonnes of gold in its coffers, Germany has the second-largest reserves. Italy, France and Russia round out the top five, with 2,451.8 tonnes, 2,436 tonnes and 2,150 tonnes, respectively.

On Monday, US President Donald Trump accused China of devaluing its currency, and warned that if Chinese President Xi Jinping does not meet him at the upcoming G20 meeting, new tariffs on $300 billion' worth of Chinese goods (comprising virtually the entirety of Chinese exports not yet affected by US duties) would step into effect immediately. On June 1, China introduced tit-for-tat tariffs on $60 billion worth of US goods, in response to a 15 percent spike in tariffs on about $200 billion in Chinese imports a month earlier.

The trade war between the two countries began in 2018 and has gradually escalated ever since.