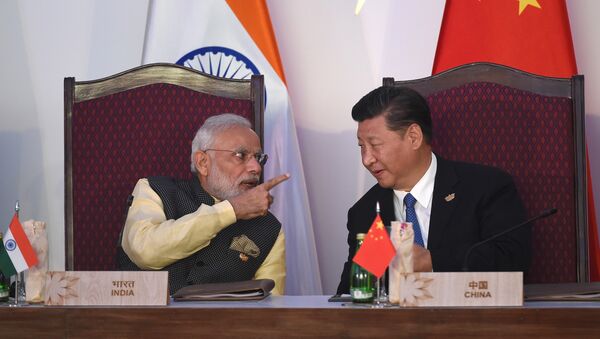 "Trade protectionism and unilateral policies are now actively gaining momentum, and the issue of how to respond to US pressure and trade protectionism is important not only for China… It will be reasonable if the leaders of the two countries exchange views [on the issue], and we hope that they will reach a broad consensus on issues of upholding justice and opposing trade protectionism," Zhang said during a press-conference.

World
Xi Jinping Calls Trump His Friend, Says US Leader Does Not Want to Sever Ties With China
Zhang also specified that Xi and Modi might also discuss the trade war between the United States and China, noting that this issue could become an important point for negotiations during the Chinese president's bilateral meetings with leaders of other countries.

The next SCO summit will be held in the Kyrgyz capital of Bishkek from June 13-14.

In late May, Kremlin spokesman Dmitry Peskov confirmed that Russian President Vladimir Putin would hold talks with Modi during the summit.

The United States and China have been trying to overcome disagreements that emerged in the wake of US President Donald Trump’s decision last June to impose 25 percent tariffs on $50 billion worth of Chinese goods in a bid to fix the trade deficit. Since then, the sides have exchanged several rounds of duties.