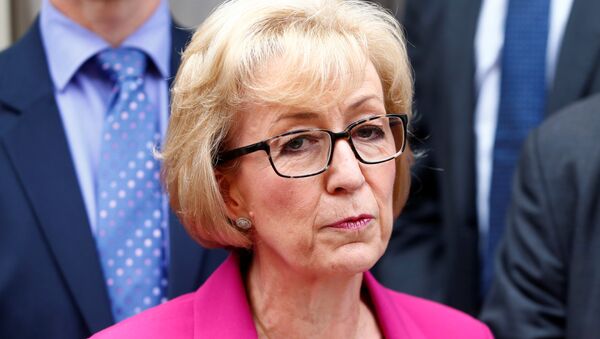 Former Commons leader Andrea Leadsom, who aspires to replace Theresa May as the leader of the UK’s government, spoke out after another Tory leadership contender, Michael Gove, revealed his history with drugs. Together with other candidates’ revelations, this has prompted a hilarious response on social media.

Conservative leadership hopeful Andrea Leadsom has admitted that she smoked marijuana when she was a student at Warwick University in the 1980s. She, however, denied any history with Class A drugs.

“I have never taken cocaine or Class A drugs. Everyone is entitled to a private life before becoming an MP. I smoked weed at university and have never smoked it again since”, the 56-year-old politician told the British outlet The Independent.

Leadsom, who used to be the Leader of the Commons, but resigned over her disagreement with May’s Withdrawal Agreement Bill, made this confession following the revelations of another Tory hopeful Michael Gove, who has been the UK Secretary of State for Environment, Food and Rural Affairs since 2017.

"I took drugs on several occasions at social events more than 20 years ago. At the time I was a young journalist. It was a mistake. I look back and I think, I wish I hadn't done that”, he told the Daily Mail, also voicing an opinion that past mistakes should not disqualify him during his battle to replace May: "I think all politicians have lives before politics".

Gove and Leadsom were not the only ones who have a history of using illegal substances. Former Brexit secretary Dominic Raab, who publicly endorsed his honesty and insisted that Gove should not be dropped off the race, also earlier revealed that he had smoked cannabis at university. Raab, however, denied having taken cocaine or Class A drugs, saying they are “a bit different”.

In addition, Rory Stewart earlier confessed to having smoked opium when he visited a wedding in Iran, while Jeremy Hunt spoke out some time ago about trying a cannabis lassi during his journey in India.

READ MORE: As Theresa May Steps Down, Will Dominic Raab End Up as the ‘Anyone But Boris’ Candidate?

The Independent also cites a source close to Boris Johnson pointing at the former foreign secretary’s earlier admission about his experience with “a white substance”.

“I was once at university offered a white substance, none of which went up my nose, and I have no idea whether it was cocaine or not”, he admitted earlier.

This chain of revelations has lit up social media with users immediately linking the Brexit chaos and drug history of the Conservatives.

Brexit finally makes sense!!
They've all been on drugs this whole time!! https://t.co/Wkm7L2j9zN

​Some pointed these revelations could make a solid anti-drug campaign.

Of god now Andrea Leadsom 'admits' to smoking weed 🙄😂 'I took drugs! I'm just like the rest of you! Just ask my butler!'

But if these confessions are true, these tories are the worse advert for drugs!https://t.co/KRvxSpnOlp

​Many accused the Tories of having double standards and insisted they should not be allowed to compete for the post.

I went to Wigan Casino in 1970s and took speed... and I saw working class kids criminalised every decade since then *just for possession of dance-related drugs* while these entitled Tories did weed, e, coke ++ while mobilising voters for a "war on drugs" that ruined ppls lives https://t.co/55Fs6XoUkX

Smoking weed is the least of what we should worry about from our new Tory leader. Let's talk about them issuing dodgy Gov't contracts that they benefit from, who funds them, their financial background, do they run secret offshore accounts and why. Plenty more but not smoking weed

​Others just had fun, mocking the politicians.

Opium, weed, coke ... this Tory drug off is getting crazy. Next Jacob Rees-Mogg will admit he once took laudanum in 1892. https://t.co/7WcKbNAOfs

​Theresa May stepped down as Tory leader on Friday. However, under UK electoral commission rules, she will continue her job in an acting capacity until 23 July. Then the party will choose her successor, who will also become Britain's next prime minister.