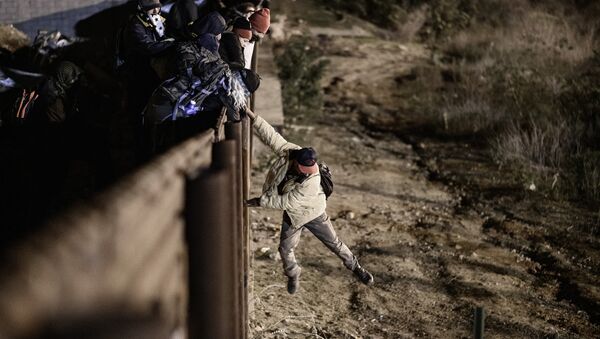 The US-Mexico deal, reached after lengthy bilateral talks, provides a variety of measures related to curbing illegal migration and has been characterised by Mexico’s foreign minister as a "fair balance". US Secretary of State Mike Pompeo also noted that the deal contains a "set of joint obligations" that will benefit both countries.

According to a joint US-Mexico declaration released Friday by the US State Department after Washington and Mexico sealed a migration deal, Mexico has pledged to take unprecedented steps to curb illegal migration and dismantle human smuggling organisations.

The document green-lights the deportation of asylum seekers from the US back to Mexico to await adjudication.

"The United States will immediately expand the implementation of the existing Migrant Protection Protocols across its entire Southern Border. This means that those crossing the U.S. Southern Border to seek asylum will be rapidly returned to Mexico where they can await the adjudication of their asylum claims", the declaration read.

READ MORE: US Apprehended 130,000 Migrants at Southwest Border With Mexico in May — CBP

Another section of the declaration envisages that asylum seekers, who return from the US, will be offered jobs and educational opportunities in Mexico.

"In response, Mexico will authorize the entrance of all of those individuals for humanitarian reasons, in compliance with its international obligations, while they await the adjudication of their asylum claims. Mexico will also offer jobs, healthcare and education according to its principles", the declaration added.

Mexico will also initiate the deployment of its National Guard next week throughout the country with a priority on its southern border, according to the document.

"Mexico will take unprecedented steps to increase enforcement to curb irregular migration, to include the deployment of its National Guard throughout Mexico, giving priority to its southern border. Mexico is also taking decisive action to dismantle human smuggling and trafficking organizations as well as their illicit financial and transportation networks […] The United States and Mexico commit to strengthen bilateral cooperation, including information sharing and coordinated actions to better protect and secure our common border", the declaration concluded.

The two countries also agreed to continue their talks on measures to tackle illegal migration, saying their deal would be completed within 90 days, if necessary.

Following the document's release, Mexican Foreign Minister Marcelo Ebrard said Friday that the agreed upon deal is a "fair balance" between the two countries, adding that the two nations will lead efforts to create a prosperous and safe Central America.

US Secretary of State Mike Pompeo said Friday that Washington is looking forward to working with Mexico to curb illegal migration.

"We would like to thank Mexican Foreign Minister Marcelo Ebrard for his hard work to negotiate a set of joint obligations that benefit both the United States and Mexico. The United States looks forward to working alongside Mexico to fulfill these commitments so that we can stem the tide of illegal migration across our southern border and make our border strong and secure", Pompeo said in a statement at the conclusion of talks with Mexico.

Ex-Daesh Fighter Reveals Terror Plot to Infiltrate US Through Mexico
Earlier in the day, US President Donald Trump said that the United States and Mexico had reached a "signed agreement" under which Washington would suspend the introduction of trade duties while Mexico City takes strong measures to curb illegal migration at the border.

Ebrard has confirmed that the United States will not impose trade tariffs.

"The US will not introduce tariffs on Monday. Thank you to everyone who has supported us, meaning the greatness of Mexico", Ebrard wrote on Twitter late on Friday.

Trump has vowed for months to stop the influx of illegal migrants from Central America via the Mexican border.

Last week, Trump said Washington would impose a 5 percent tariff on all goods imported from Mexico beginning on 10 June, adding that the duties would go up to 25 percent by October unless America's southern neighbour quelled the illegal immigration crisis. The countries subsequently engaged in talks to resolve their tensions.