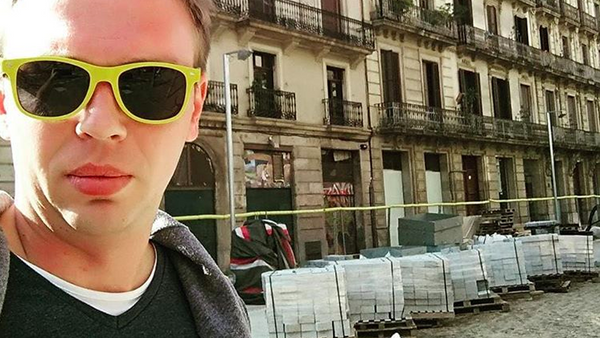 © Photo : Instagram/ Ivan Gollunov
Subscribe
The journalist, who earlier worked for top Russian media outlets as a correspondent and editor, claimed that parcels containing illegal substances had been planted secretly on top of his personal items in his backpack.

Ivan Golunov, an investigative journalist and correspondent for the Russian outlet Meduza, has been detained in downtown Moscow, with police stating that during the search, “five parcels with powder substances were seized”. Separately, another parcel, three bags, and scales were found in his apartment, which was also searched on Friday, the statement read, adding:

“According to the expert examination, the seized substance is drugs - methylephedrine, about 4 grams in total”.

Police have launched a criminal case and investigation into the journalist over the “illegal production, sale, and delivery of narcotic substances”. Golunov passed on a message through his friends that two bags had been stealthily placed in his backpack.

The journalist’s lawyer, Dmitry Julay, told Sputnik in an interview that there are reasons to conclude that the drugs could have been planted secretly in his belongings during his detention, as the parcels with the prohibited substance were lying above Golunov’s personal possessions, without being mixed in with them. Also, according to the lawyer, no finger or nail prints were collected, nor were samples from the backpack fabric – a fact that speaks in favour of his client.

“Ivan [Golunov] asserts that the reason for the incident is his professional journalistic occupation. We consider this to be a provocation and that the drugs could have been planted stealthily”, Dmitry Julay said.

Moscow ombudsman Tatyana Potyaeva shared with Sputnik that she is keeping the case under control.

Meanwhile, over Friday, the journalistic community has been holding a series of one-man protests in Golunov's support near the Minsitry of Internal Affairs' building, demanding that he be released.

000000
Popular comments
This bloke may or may not be guilty but he needs support to see that the truth comes out. Journalism is not only a sensitive issue in the north Atlantic countries.
ian
7 June 2019, 19:10 GMT
000000
Newsfeed
0
New firstOld first
loader
LIVE
Заголовок открываемого материала
Access to the chat has been blocked for violating the rules . You will be able to participate again through:∞. If you do not agree with the blocking, please use the feedback form
The discussion is closed. You can participate in the discussion within 24 hours after the publication of the article.
To participate in the discussion
log in or register
loader
Chats
Заголовок открываемого материала
Worldwide
InternationalEnglishEnglishMundoEspañolSpanish
Europe
DeutschlandDeutschGermanFranceFrançaisFrenchΕλλάδαΕλληνικάGreekItaliaItalianoItalianČeská republikaČeštinaCzechPolskaPolskiPolishСрбиjаСрпскиSerbianLatvijaLatviešuLatvianLietuvaLietuviųLithuanianMoldovaMoldoveneascăMoldavianБеларусьБеларускiBelarusian
Transcaucasia
ԱրմենիաՀայերենArmenianАҧсныАҧсышәалаAbkhazХуссар ИрыстонИронауОssetianსაქართველოქართულიGeorgianAzərbaycanАzərbaycancaAzerbaijani
Middle East
Sputnik عربيArabicArabicTürkiyeTürkçeTurkishSputnik ایرانPersianPersianSputnik افغانستانDariDari
Central Asia
ҚазақстанҚазақ тіліKazakhКыргызстанКыргызчаKyrgyzOʻzbekistonЎзбекчаUzbekТоҷикистонТоҷикӣTajik
East & Southeast Asia
Việt NamTiếng ViệtVietnamese日本日本語Japanese俄罗斯卫星通讯社中文（简体）Chinese (simplified)俄罗斯卫星通讯社中文（繁体）Chinese (traditional)
South America
BrasilPortuguêsPortuguese
NewsfeedBreaking
06:10 GMTThe Bennett-Lapid Government's First 100 Days: What Promises Have They Broken?
05:52 GMTPowerful Earthquake in Australia Damages at Least 46 Buildings
05:42 GMTUK Reportedly Mulls Joining US-Mexico-Canada Trade Deal as FTA With America Stalls
05:24 GMTBrazilian Health Minister, Who Arrived at UN, Says Contracted COVID-19
04:30 GMTA Sigh That Tells It All: Golden Retriever Wants Attention
04:28 GMTLive Updates: Germany Registers 10,454 New COVID-19 Cases
04:11 GMTFlorida Gov. Orders All State Agencies to Search for Laundrie After Petito's Remains Confirmed
03:43 GMT'Nothing New on That': Bill Gates Brushes Off Question About His ‘Dinners’ With Epstein
03:33 GMTGOP Politicians Stand by US Border Patrol After Claims They 'Whipped' Refugees at Rio Grande River
03:14 GMTPele Cheers Up Fans by Posting Video of Him Riding Exercycle in Hospital
03:07 GMTAxis of Resistance Killed US, Israeli Commanders in Revenge for Soleimani's Assassination - Report
02:56 GMTPolitical Capital & GOP in His ’Grip’: Trump ’Wants Back’ in 2024, Journos Say
01:43 GMTIRGC Chief: Iran No Longer Sees US as Threat - Report
01:18 GMTChinese Covid Vaccines Reach 100 Nations, But WHO Warns Africa Still Short 470 Million Shots in 2021
01:04 GMTAwkward Moment as White House Staff Cuts Off Biden-Johnson Meeting in Mid-Sentence
00:20 GMTVideo: Military Jet Intercepts Small Aircraft Over NYC in the Middle of UN General Assembly
00:19 GMTPark Ranger ‘Implored’ Gabby Petito to Distance Herself From Toxic Relationship With Brian Laundrie
YesterdayVideos: 6.0 Earthquake Strikes Southeastern Australia
YesterdayPro-Reunification Candidate Chang Ya-chung Edges Ahead as Chairman Election in Taiwan’s KMT Nears
YesterdayTexas Governor Vows to Prevent Del Rio Migrant Surge Disaster From Being Replicated