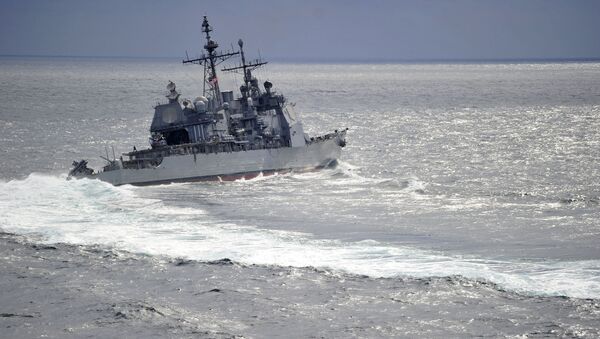 Several parts of the South China Sea are contested by six regional states, while in fact, China controls the vast majority of the territory. The US is actively trying to contest Beijing's dominance in the region by sending military ships there.

The US Seventh Fleet, which is headquartered in Japan, refuted on Friday the accusations made by the Russian Pacific Fleet regarding a dangerous manoeuvre carried out by a US Navy cruiser near a Russian destroyer in the East China Sea, saying that it was the Russian vessel that nearly caused a collision between the ships.

"While USS Chancellorsville was recovering its helicopter on a steady course and speed when the Russian ship DD572 manoeuvred from behind and to the right of Chancellorsville accelerated and closed to an unsafe distance of approximately 50-100 feet. This unsafe action forced USS Chancellorsville to execute all engines back full and to manoeuvre to avoid collision", the Seventh Fleet said in a statement.

At the same time, the US Navy said that the incident had happened not in the East China Sea but in the nearby Philippine Sea.

"We consider Russia's actions during this interaction as unsafe and unprofessional and not in accordance with the International Regulations for Preventing Collisions at Sea (COLREGS), 'Rules of the Road,' and internationally recognized maritime customs", the statement added.

According to a statement issued by the Russian Pacific Fleet earlier in the day, the USS Chancellorsville has crossed the course of the Russian destroyer Admiral Vinogradov.

"Today, at 6:35 am Moscow time (3:35 GMT) while the Russian sea detachment of the Pacific Fleet moved along with the US carrier attack group, the USS Chancellorsville suddenly changed its course and crossed the path of the Russian destroyer Admiral Vinogradov just 50 metres away from the ship", a statement issued by the press-service said.

The Russian destroyer's crew had to perform urgent manoeuvers to evade a possible collision. After the incident, the Russian military lodged a protest against such actions by the US.