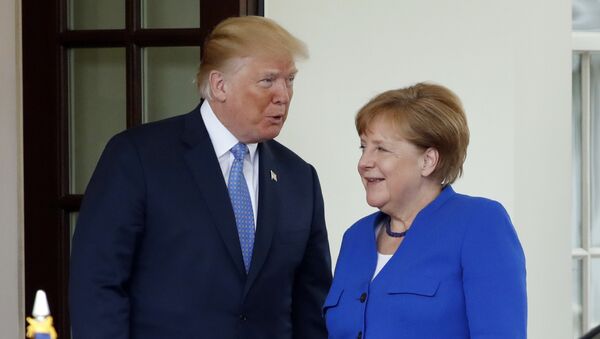 © AP Photo / Jacquelyn Martin
Subscribe
During his trip to the UK, where he took part in D-Day commemoration events and met European leaders, the US president sat down with Fox News to debunk critics who predicted his international policy would mean failure, NATO’s fracture, and the isolation of the US.

US President Donald Trump has denounced critics of his NATO policy, saying while the alliance “was going down” over the last 15 years, it is “like a rocket ship up” now. According to the US commander-in-chief’s interview with Fox News, NATO Secretary General Jens Stoltenberg sided with him.

“And secretary Stoltenberg has been maybe Trump’s biggest fan, to be honest with you. He goes around, he made a speech the other day, said, without Donald Trump, maybe there would be no NATO”, Trump insisted, noting that NATO got over $100 billion from other countries now “starting to pay”.

He lamented once again that the US had gotten to a point where the country was “close to paying 100% of NATO” and accused other allies of having avoided sharing the burden.

“So, we were paying to protect all of these European nations, and it is not just fair. I told them that, I told the countries, the heads of the countries. I said: ‘It’s not fair’. The United States, possibly, does not even benefit… They paid over a hundred billion dollars more towards their defence”, he said.

He could not help but take aim at Germany, who has resisted boosting its spending despite Trump’s repeated criticism. He insisted that Berlin should “be paying much more” than it does now and accused it of “taking advantage of us”. Refuting all allegations about a rift between Trump and Merkel, he noted that his persistence about NATO spending even made her laugh.

“I was with Angela Merkel yesterday, whom I like a lot. A lot of people think we don’t have good relationship… We do! And she even smiles, when I say, look, you have to pay, and she sort of laughed, because for years, they have got away with this. It’s unfair”, Trump concluded.

Asked about her recent call for Harvard University graduates to tear down walls of ignorance and fight isolationism without mentioning any names, something interpreted as an anti-Trump rant, POTUS suggested that “she has to say what she has to say”. He noted that she had “a pretty tough election a couple of days ago” but noted that he likes her, nevertheless.

“I get along with her but I said: ‘You have to pay’. Most of the nations are now either current or very close to current. And that is tremendous. It’s over a hundred billion dollars in a very short period of time”, Trump insisted.

Since Donald Trump took office in 2017, he has repeatedly pressed NATO member states to meet their annual defence spending obligations in the alliance, even insisting that they raise their expenditures to 4 percent of GDP — instead of the existing target of 2 percent, accepted several years ago. He has specifically lashed out at Germany, criticising it for refusing to meet the goal.

According to the latest estimates, Germany allocated a total of 1.23 percent of its GDP for defence last year. Berlin is reportedly planning to further boost defence expenses next year to 49.7 billion euros, or 1.38 percent of its GDP. Merkel has additionally pledged to boost the country's military spending up to 1.5 percent of its GDP by 2023, which still misses the NATO target.

000000
Popular comments
What can we expect after America's parasitical ally, Israel, has blood-sucked Germany dry for compensation for murders it didn't commit (He could not help but take aim at Germany, who has resisted boosting its spending)

keyboardcosmetics
7 June 2019, 10:10 GMT4
000000
“[Trump] has repeatedly pressed NATO member states to meet their annual defence spending obligations in the alliance...” Trouble is NATO is not used for defence. It’s used for offense whose main target is Russia. Russia is not taking offensive measures to expand the Russian empire. NATO is the one guilty of offensive measures out to expand the Israeli globalist empire.