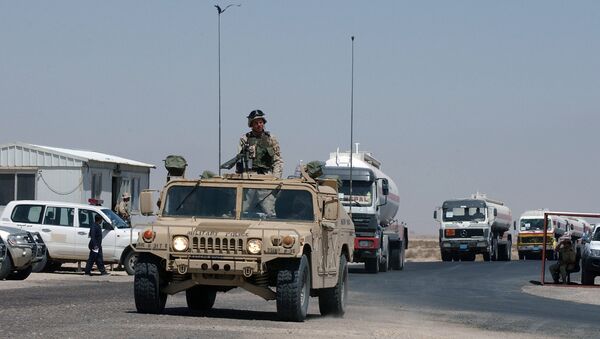 WASHINGTON (Sputnik) - The White House plan to deploy an additional 1,500 troops is based on false pretexts to spark a war with Iran and will only destabilise the region even further, Virginia State Senator Richard Black told Sputnik.

"Any time that we add troops to the Middle East, it is a negative. It never creates a positive result. It continues the destabilisation", Black said. "We're sending the troops so that we can protect our troops from being attacked. Well, why don't we take our troops out of there and then they won't be attacked? And then we won't have to worry about it".

Black said the idea to create stories about ships being attacked and sending Tehran an unrealistic set of demands were part of a plan to spark a war with Iran. According to the state senator, one would think the UAE and the Saudis would immediately have pictures of the damage, but no evidence has been provided.

The politician said he thinks the United States made these moves to perhaps trigger some miscalculation on the part of the Iranians.

Black also was critical of a list of 12 demands Washington gave Tehran last month that called on Iran to stay out of Syria, stop developing ballistic missiles and halt support for groups like the Houthis in Yemen, among other things.

"They ask Iran… to withdraw all their forces throughout Syria. If that happened, then Syria, which relies considerably on Iran, they would be seriously threatened by al-Qaeda [terrorist group banned in Russia]", Black said. "And if you withdraw the support that Iran has given to Syria, then once again this is an attempt to turn Syria over to militant jihadists who have promised to behead all the Christians, to enslave all the women Christians and they've shown that they've done it as they've gone along".

Al-Qaeda is the force that remains in Syria today, Black explained, but the Islamic State terrorist group (IS, banned in Russia) is also still there and is a significant force but they do not hold specific territory.

"They've [US-backed terrorists] been probably more brutal than any force in our lifetimes. And these are the people that we have supported directly sometimes, indirectly other times", Black said.

Black also called ironic the US demand to Iran to end support for senior al-Qaeda leaders.

"Iranians are coming back from the battlefield in caskets. Iran has shed considerable blood fighting against ISIS [Daesh*] and al-Qaeda. And somehow the idea that they are harbouring al-Qaeda leaders is most mysterious. How can we make that claim… when they are out on the battlefield fighting al-Qaeda?" Black wondered. "And so, this idea that Iran is somehow helping al-Qaeda is just absolutely bizarre".

READ MORE: Iranian Analyst: Qatar, Hosting US Base, 'Would Never Risk' a Conflict With Iran

Meanwhile, Black added, the United States is not fighting al-Qaeda.

"The United States is giving them [al-Qaeda] diplomatic cover in Idlib province. American weapons are getting to al-Qaeda [and] we are giving them to other groups, and other groups sell them", Black said.

Black also pointed out that Iran would never agree to the demand to open up all sites throughout the country to inspection.

"The Iranians would never accept that — that's an invitation for spies to get in and to map out in detail every military location, every defensive location that they have in the country", Black said.

The senator also said that he is in favour of the leaders of Iran and the United States holding a meeting to solve the ongoing tensions.

"I think it is always a good thing to do. I think particularly with president Trump this is very good. He works well on personal relationships", he said.

At the end of May, President Donald Trump said he would deploy additional troops to the Middle East to protect US service members and interests in the region while US officials blamed Iran for the recently reported attacks on oil tankers off the UAE coast.

How to End War in Syria

According to Black, the Syrian war would end very fast and the people would start rebuilding their country if US forces left the war-torn nation.

Syria, he added, would have ended the war if the United States and its allies did not intervene and establish at least a dozen bases in northeast Syria and one in At-Tanf in the southern part of the country.

US Special Envoy Denies Reports Alleging Deal With Russia to End War in Syria
Black, who personally met with Syrian President Bashar Assad twice in 2016 and in 2018, said during his second visit the war "was going much more favourably to Syria."

Although he believes the war will be settled on the field of battle, Black noted it always worth negotiating with the other side, adding that Russia Foreign Minister Sergei Lavrov has been key in ensuring the talks continue.

"I am sure that there would continue to be talks. I think Foreign Minister Lavrov has been enormously helpful. The man is brilliant," Black said. "He is in every respect a diplomat. He does not just bluster and bully and make bellicose pronouncements. He is a very sophisticated man".

Black also observed that US interference also strengthened the Kurdish minority at the expense of the remainder of the Syrian population.

"We set up this Kurdish-led government in northeast Syria. We gave all of the oil and much of the agricultural produce that should be providing heat and food for all of the people of Syria and we shut it off and gave it to this small Kurdish minority", Black said.

The United States, Black argued, helped establish a "sort of government" for the Kurds in Syria. The Kurdish minority, which represents only 10 percent of the Syrian population, now "governs" over the other 90 percent of the country that includes Arabs and Christians, Black said.

Black stressed that one thing he is quite disdainful of is the proposed talks to revise the Syrian constitution.

"I find it very ironic that one of the countries that shouting the loudest that Syria has to change its constitution is Saudi Arabia. Now Saudi Arabia has no constitution… and yet they are calling for Syria, pounding on the table, demanding that Syria changes its constitution. All that I can figure is that they want to take away the religious freedom that people have in Syria".

Before the war, Black added, people in Syria had enormous religious freedom.

"I was very pleased when I went in 2018 to see that so many of the Christian churches that had been burned out, the religious artefacts defiled, crosses ripped down — they have been rebuilt", he said.

US-Led Coalition Admits Killing at Least 1,302 Civilians in Syria and Iraq
Black said he told Assad he was pleased with how the Syrian government had nicely rebuilt the Saint Mary Church of the Holy Belt — where there is a fragment of the belt worn by the Virgin Mary, the mother of God. The state senator added that the Syrian government has also been very active in rebuilding mosques as well.

US President Donald Trump announced in December that the United States would withdraw some 2,000 troops from Syria, but Black said none have left the country.