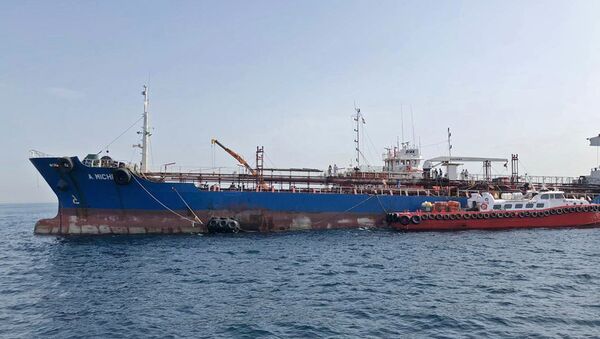 On Thursday, the United Arab Emirates, Norway, and Saudi Arabia claimed in a joint statement at a UN briefing that the limpet mines, which were used in a "sophisticated and coordinated operation", were allegedly placed by divers deployed by speed boats.

"The assessment of the damage to the four vessels and the chemical analysis of the debris recovered revealed it was highly likely that limpet mines were used in the attacks on the four vessels on 12 May 2019 … The attacks required trained divers; the explosive charges were placed with a high degree of precision under the waterline, in ways that were designed to incapacitate the ships without sinking them or detonating their cargoes - indicating minute knowledge of the design of the targeted ships," the statement read.

Earlier, US Secretary of State Mike Pompeo claimed that Iran could quite possibly be behind the attacks although no one has claimed responsibility for the sabotage. US National Security Adviser John Bolton similarly accused the Islamic Republic of likely being behind the attack, whereas Tehran denies all allegations.

READ MORE: Trump Says He Doesn't Want Iran to 'Fail as a Nation', Claims He Can 'Turn That Around'

Meanwhile, the joint statement on Thursday did not mention, Iran's alleged involvement. The document claimed that the attack was carried out by a purported "state actor."

US Troop Deployment Against Iran Likely to Destabilise Mideast - State Senator
Tensions around Iran have been escalating since May 2018, when the United States pulled out of the Iran nuclear deal and re-imposed sanctions on the Middle Eastern nation, particularly targeting its oil sector. US actions forced Iran to retaliate and partially discontinue its obligations under the nuclear agreement.

Last month, the Pentagon sent warships and bombers to the Persian Gulf in response to an unexplained threat from Iran. Saudi Arabia hosted Arab, Gulf and Islamic summits last week to gather support for unified opposition to Tehran.