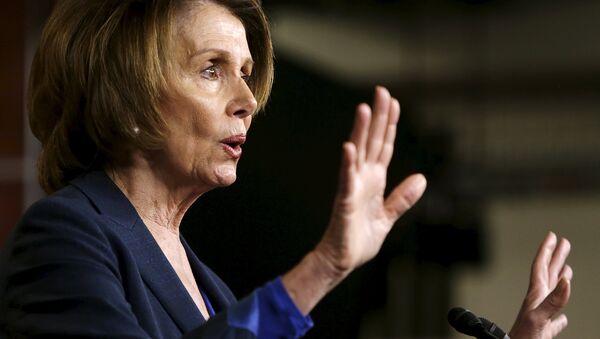 The House speaker has long resisted calls for the impeachment of President Trump, arguing that there is not enough popular support for the idea, and a failed impeachment attempt will result in Trump’s ratings skyrocketing instead.

US House Speaker Nancy Pelosi allegedly said to senior Democrats that she would like to see US President Donald Trump "in prison," according to a Wednesday report by Politico.

According to sources quoted by Politico, Pelosi made her remark during a meeting with House Judiciary Chairman Jerrold Nadler and other top Democrats on Tuesday.

The sources told Politico that during the meeting, Nadler pressed Pelosi to authorize an impeachment inquiry against Trump, which the Dem leader denied.

US House Judiciary Committee: No Support for Impeachment Probe of Trump - Report
Her office did not respond to a request for comment on the alleged quote yet.

Later on Wednesday, Nadler said in an interview that "it may very well come to [the impeachment inquiry]," but "right now, there doesn't appear to be the support for it," a report by The Hill says.

Earlier last week, Nadler said he believes the American people do not support the idea of impeachment either.

For months Pelosi has sought to quell calls for impeachment coming from more hawkish fellow Democrats, arguing that a failed impeachment attempt would backfire horribly — as was the case with the botched attempt to impeach President Clinton. The Democrats, however, are running out of means to counter Trump politically, and more Dems are joining the call to impeach President Trump.