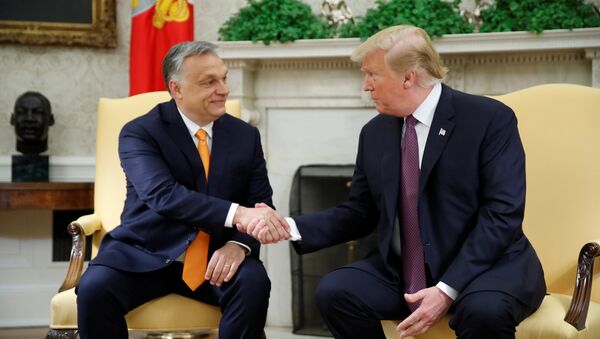 Hungary and Norway, both NATO members, are at odds over Norway's $242 million contribution. While Oslo believes the money is intended to promote civil society, Budapest argues this money is a fee to enter the Hungarian market.

A weapons system developed by the Norwegian company Kongsberg Gruppen and the troubled relations between Hungary and Norway was one of the main topics when US President Donald Trump welcomed Hungary's Prime Minister Viktor Orbán to the White House on 13 May, the Norwegian newspaper Verdens Gang reported.

The reason for the controversy is the agreement to purchase the air defence system NASAMS, jointly developed by US Raytheon and Norwegian Kongsberg Group. According to the Hungary, the $1 billion agreement is ready to be signed, but has been put on hold over disagreements between Oslo and Budapest.

Hungary and Norway, both NATO members, have deep disagreements about the rules and terms on how to use the Norwegian contribution of €214.6 million ($242 million).

“We are aware that Hungary has addressed this with the US authorities. It is unacceptable that such a link is made between the purchase of defence material and negotiations for a new framework agreement for the EEA funds between the EFTA countries, Norway Iceland and Liechtenstein”, state secretary Audun Halvorsen at the Ministry of Foreign Affairs told Verdens Gang.

“There is no connection between these cases, and it will not, in any case, make us change our position in the negotiations. We are in regular contact with the US authorities, and we have no reason to believe that the USA will follow up on the Hungarian initiative”, Halvorsen continued.

READ MORE: Hungary May Scrap Swedish Jet Deal for US F-35 Over War of Words - Report

While the Norwegian authorities said the money was EEA funds made available to Hungarian civil society, Viktor Orban's press spokesman, Zoltan Kovacs, maintained that Oslo had no right to dictate to Budapest on how to spend the funds.

“What happens in Hungary does not concern Norway. To put it right, the Norwegian authorities have nothing to do with that”, Kovacs told Verdens Gang. “There are EU funds that are to be disposed of exclusively by the Hungarian authorities. This is money you have to pay to access the Hungarian market. Norway has agreed to get the financial benefits of having entered into an agreement with the EU. These funds are the price Norway will pay”, Kovacs maintained.

In service since 1998, NASAMS is in operational use in Norway, Spain, the US, the Netherlands, Finland, and one undisclosed customer. The system is currently in production for Oman, Lithuania, and Indonesia.