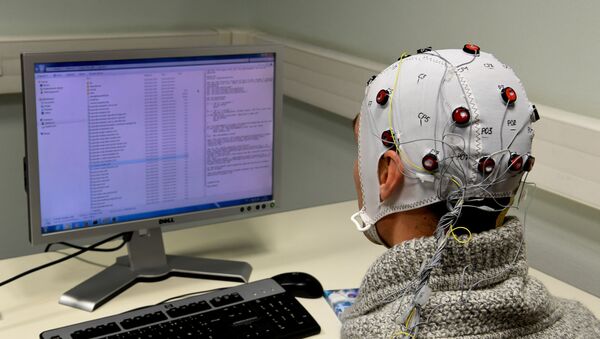 Technology that will allow direct communication with the human brain is already causing numerous concerns regarding possible misuse, especially in terms of thought privacy and forced brainwashing.

The US military's Defence Advanced Research Projects Agency (DARPA) has initiated research aimed at creating a so-called brain-computer interface (BCI) that will allow two-way communication between a human soldier and, for example a swarm of drones or computer cyber defences.

In an interview with Express, Professor Jacob Robinson of Rice University, head of one of the six research teams funded by DARPA for that purpose, has revealed the technology will essentially allow people to "tap into the brain" without performing an invasive surgery to install an implant into it. Such an approach will permit a drastic reduction in the gap between making a decision and sending a corresponding command to a machine.

"There is a delay between my thought and the movement of the muscles required to interface with the external world. So the idea is if we can communicate from the brain to the external world without having to move a muscle then we could have a much faster communication with external devices", he said.

DARPA expects to get the technology for an interface capable of delivering commands with up to 50 milliseconds by 2023. After that, clinical tests and implementation will follow. Robinson believes that in 10-20 years BCI will become available on the civilian market.

"Applications can include patients who are 'locked in' or paralysed and we also think this technology could be used in the commercial sector and in the military – perhaps even recreationally, as it allows much faster communication with your computer", the professor said.

At the same time, the technology isn't new, and researchers have already reached a certain degree of success with brain implants capable of reading brain signals and converting them into commands for computers and other machines. But as the technology develops, the ethical concerns regarding its misuse become more acute.

Robinson says the researchers are fully aware of them and are working together with ethics experts to form so-called "neural-ethical standards" that will regulate the use of the technology. He said that addressing such concerns is crucial, especially considering the fact that the US government is participating in developing the BCI.

"And there is additional concern when technologies like these are being developed by the US government, as there is always the potential for them to be misused. There will be, for example, concerns over privacy, use of the data and autonomy", he said.