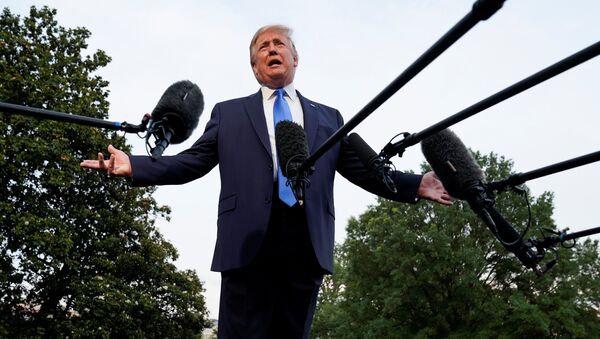 © REUTERS / Joshua Roberts
Subscribe
For years, Donald Trump has been trolled by social media users for avoiding the US military draft during the Vietnam War by getting a medical deferment for bone spurs, but now netizens have seemingly received some new food for fodder.

US President Donald Trump has revealed to Piers Morgan that he was never a “fan” of the Vietnam War and suggested that nobody had heard of the Asian country in the 1960s before the conflict broke out.

Even though he’s not a “fan”, POTUS, who avoided being drafted into the military during the Vietnam War as he was diagnosed with “bone spurs”, claimed that he would have been honoured to have served:

"I would not have minded that at all. I would've been honoured, but I think I make up for it right now. I think I'm making up for it rapidly because we're rebuilding our military at a level that it's never seen before”, he told Morgan while visiting London for ceremonies marking the 75th anniversary of D-Day, the Allied invasion of France in June 1944 during World War II.

Unsurprisingly, his remarks set off a major Twitterstorm, with many roasting him for claiming that no one had heard of Vietnam at the time:

My favorite line is no one ever heard of Vietnam. Did he not watch TV back then? Was he that unaware of the world? Do bone spurs cause a hearing problem?

Funny. I had heard of Vietnam. Then I had to experience it.

So far away. I wonder if he thought he’d be expected to walk there. What with his bone spurs and all.

My question is, who is a "fan" of war?!#DerangedDonald

Sane people aren't "fans" of war—only #StableGeniuses would even think that. I’ve met many #WWII #DDay Vets. None ever said they were fans of war. They simply answered their nation’s call, regardless of what they thought. Especially during the draft—it wasn’t optional for them 3/

Some also recalled one of his umpteen nicknames coined by Democratic Senator Tammy Duckworth long ago – Cadet Bone Spurs, while slamming his comments:

#CadetBoneSpurs: no one cares whether you were a “fan” of the Vietnam War. No one believes you were medically unfit to serve. You used your wealth & privilege to avoid serving your country five times, forcing another American to serve in your place each time. 1/ https://t.co/bSZbQlnWMf

Trump would only fight and serve in the best wars. Tremendous wars.

Cadet bonespurs. Not a fan of Vietnam war because it was too far away. Wish my dad had thought of that excuse. https://t.co/z3qpTpk2K5

Trump’s medical deferment from the draft has been a subject of much controversy, with many doubting the diagnosis. During the presidential campaign, the Trump team said that he had a “medical deferment for bone spurs on both heels of his feet”, and that he entered the military draft lottery, receiving number 356 out of 365.

“When the draft occurred, they never got near his number, and he was therefore exempt from serving in the military. Although he was not a fan of the Vietnam War, yet another disaster for our country, had his draft number been selected he would have proudly served and he is tremendously grateful to all those who did”, his campaign stated at the time.