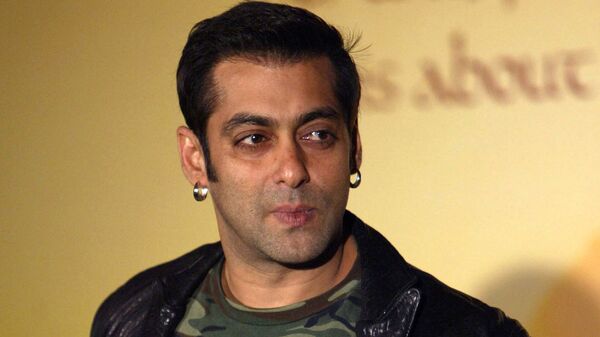 The latest row seems to be nothing new for Salman, who is usually found surrounded by controversies. Earlier this year, he snatched a journalist’s phone for video recording him without his consent when he was cycling on the streets of Mumbai.

New Delhi (Sputnik): Popular Indian film actor Salman Khan, who has over 37.1 million fans on Twitter alone, recently sparked a row on social media after publicly slapping his bodyguard for allegedly misbehaving with a child fan.

The reported incident occurred on Tuesday as Salman, along with his guards, was walking past a crowd after the premiere of his recently-released Bollywood flick "Bharat". When the crowd looked and became quite excited to see him, some of them tried to surround him for "selfies".

A little fan, meanwhile, tried to get too close to the Bollywood star and in the rush was pushed away by one of his bodyguards. The moment Salman noticed it he immediately slapped the bodyguard in front of all his fans. But the moment this video clip was posted on social media, it triggered online debate over whether the actor was justified in his action or went a bit too far in punishing his own bodyguard.

It's only @beingsalmankhan who can slap his bodyguard in front of public for behaving rudely with his fans ''tamacha zor ka pada boss" https://t.co/kl3Vq6ZxTr

​Salman, who is one of the leading stars of Bollywood and is known to have a huge fan following, was trolled by a section of the twitterati for his "rude" behaviour towards his staff.

Wow.. No matter what Indian law does not give him any right to slap. He cannot take law in his hands. He is a hypocrite he does not speak up when Muslims are lynched in India. Instead he praises Modi. Tumhaari jaise auraton ki wajah se islam barbaad ho raha hai

​One user even wanted to know whether Salman would have the audacity to slap someone when he does not have his security cover around him.

With so heavy own bodyguards everyone can slap anyone. If #salmankhan dares, go without his own bodyguards and slap someone! Kya mardangi hai!! https://t.co/X3XtPTV9rj

​However, his fans were quick to counter the trolls on social media and came to his support, claiming the spontaneous action only showed his affection for the young fan.

Awesome @BeingSalmanKhan! Haters will make up some negative stories but for FYI: Salman slapped his security guard who failed to take care of small kids getting trampled in crowd! That is SALMAN KHAN for YOU! ❤️https://t.co/f6g0a8JX0N