US House Judiciary Committee: No Support for Impeachment Probe of Trump - Report 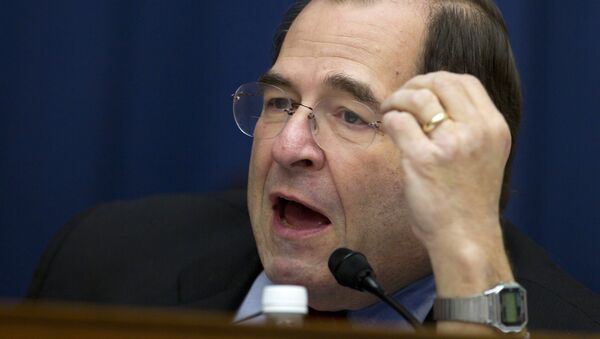 US House of Representatives Judiciary Committee Chairman Jerrold Nadler said Wednesday, cited by Reuters, that there is no support for an impeachment probe of US President Donald Trump.

"It very well may come to a formal impeachment inquiry", Democratic Representative Jerrold Nadler told CNN in an interview, cited by Reuters. "There does not appear to be support for it now. And we will see. The support may develop".

In May, Nadler said US Congress must act following Special Counsel Robert Mueller's remarks that his office did not consider charging President Donald Trump, due to Department of Justice policy.

Mueller made his first public remarks in May, after concluding the investigation into allegations of Trump-Russia collusion and Russian interference in the 2016 US presidential election. Mueller said that charging Trump with a crime was not an option that his office could consider given Justice Department policy.

Nadler has said that Mueller's comments demonstrated that the US president has been lying about the report's findings.

Journo on Mueller Report: Media, Dems Are Trying to Suck Blood Out of This Stone
The Mueller report concluded that Trump's campaign team did not collude with Russia, but described ten instances of actions by Trump that may constitute obstruction of justice. US Attorney General William Barr said that evidence provided in Mueller’s report does't suffice to confirm obstruction of justice.

However, Democratic Congressman Mark Pocanhas said that Congress should immediately initiate the impeachment process for Trump over possible obstruction of justice charges after remarks by Special Counsel Robert Mueller.

The US House of Representatives has the sole authority to impeach or indict a sitting president, while the Senate has the sole power to make a conviction, according to the constitution. If Trump is impeached by the Democratic-controlled House, many believe the Republican-majority Senate will not uphold the action.