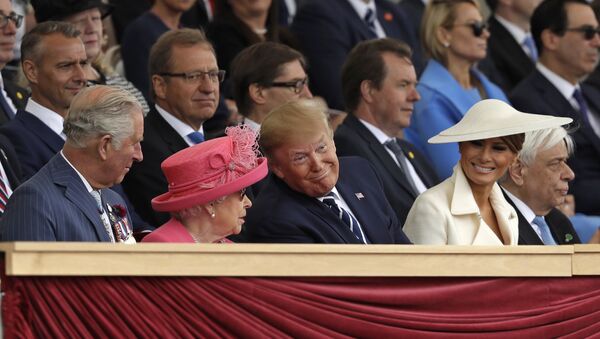 The mainstream media had been eagerly awaiting US President Donald Trump’s state visit to the UK for some time indeed. After all, the POTUS has a habit of sparking controversy during his foreign trips.

For instance, the July 2018 NATO conference in Brussels saw him turn up late to a number of meetings, viciously and openly castigate Germany for not meeting the military alliance's two percent defence spending requirement and demand every member state meet the total, threatening to withdraw the US from the bloc if they didn't, and cancel or no-show a number of scheduled one-on-one summits with other leaders.

For news outlets, almost universally hostile to the President, it was a veritable goldmine of material. ‘What catastrophes will be unleashed by Trump's official state visit to the UK?' they surely wondered.

On 3rd June, the first day of the three-day sojourn, it looked like the POTUS wasn't going to disappoint before he'd even arrived. The previous day, London Mayor Sadiq Khan wrote an article for the Observer suggesting it was "un-British" to "roll out the red carpet" for Trump, and accused him of invoking similar language to that used by 20th century fascists.

Just before Air Force One touched down at Stansted Airport, the President took to Twitter to launch a vicious broadside against Khan, calling him a "stone cold loser" who was "very dumb" and "incompetent", mocking his diminutive stature.

.@SadiqKhan, who by all accounts has done a terrible job as Mayor of London, has been foolishly “nasty” to the visiting President of the United States, by far the most important ally of the United Kingdom. He is a stone cold loser who should focus on crime in London, not me……

​While his comments sent numerous journalists into meltdown, the attack was balanced with Trump pledging to be "a great friend" to the UK, and stating he was "looking very much forward" to his visit despite Khan's comments. In the process, the President made clear he wasn't going to allow his UK critics to ruin the visit, and highlighted how Khan's party, Labour, had very publicly opted to boycott the entire visit some weeks prior, a move condemned by government officials and contrary to public opinion — a majority (46 percent) of Britons were in favour of the trip going ahead. Perhaps they wanted a better look at Britain's "great friend".

"It's totally inappropriate for the Labour party to be boycotting this important visit…this is the President of the United States, and we're celebrating the D-Day landings when we had a million US servicemen in the UK, willing to risk their lives for our liberty, our democracy, our values. This should be above party politics…it's absolutely disgraceful," UK Foreign Secretary Jeremy Hunt said.

Spat With London Mayor & Warm Royal Welcome: Trump's First Day of UK State Visit
The day would go on to be a disaster — albeit for Trump's critics, given it transpired without a single hitch. The disappointment of news outlets was palpable — NBC foreign correspondent Keir Simmons perhaps summed up the media mood best towards the end of the day when he assured viewers the footage dominating news networks of the President being warmly received by the Royal Family and appearing to be having a rather successful trip might not tell the full story.

"Despite these pictures that are playing out…behind the scenes there are rumblings and questions. The American and the British press, which are two of the most inquisitive and determined press in the world…if there have been incidents, they are likely to to discover them and publicise them. I don't think we can necessarily assume just because this is looking good now it will look good in the next few days," he said.

Dissatisfaction was writ large on the faces of a great many TV reporters- as footage of handfuls of protesters waving banners bearing anodyne slogans such as ‘Resist Racism' and ‘Say No To Trump' played on an infinite loop, they awkwardly discussed how the day's public displays of dissent were somewhat negligible, but promised tomorrow would see the inflatable Trump baby soaring above London and rioting in the streets.

The End Is Nigh!

True to form, the next morning saw news outlets concoct two imaginary and quickly extinguished scandals in the space of a single hour. First, it was announced Conservative leadership frontrunner Boris Johnson, who Trump had personally endorsed, wouldn't be meeting with the President during his UK jaunt. Widely reported initially as a vicious rebuff indicating Johnson believed Trump's support to be harmful to his high office prospects, it was quickly clarified Johnson was in fact merely busy with campaign duties, and the pair had settled for a "friendly and productive" discussion via phone.

Then, when the POTUS arrived at Downing Street at around 11am, there was widespread journalistic outcry after he and the Prime Minister failed to shake hands. Was Theresa May slighting Trump? Was Trump snubbing May? Was it a mere mistake, owing to Trump being diplomatically inept, political inexperienced and generally unfit for office? ‘Handshakegate' began to trend on Twitter, only for it to transpire the pair had in fact shaken hands earlier at an event in St. James' Palace.

As for the protests? They did materialise, but again news outlets were left wanting — instead of record-breaking numbers of activists engaging in incendiary conduct, a few thousand gathered peacefully in Trafalgar Square in preparation for a march to Parliament, but many didn't complete the journey due to the sudden onset of extremely heavy rain.

Nonetheless, Jeremy Corbyn did give a speech to those drenched demonstrators who made the trip, although the crowd seemingly ignored his entreaties to reject hatred and violence, yelling incendiary abuse at Trump supporters who turned up to the event. One grandfather donning a ‘Make America Great Again' hat was drenched in a milkshake while an NHS worker shrieked ‘Nazi!' in his face over and over again.

READ MORE: Trump Supporter After Milkshake Attack Shocked Over 'How Aggressive Left Can Be'

​Even more ironically, Corbyn felt it incumbent to explain while he'd boycotted the previous evening's state banquet in Trump's honour, he hadn't actually refused to meet Trump — sentiments confirmed by the President himself almost simultaneously only a few hundred yards away.

Asked at the afternoon's Downing Street press conference whether he could do a trade deal with Corbyn if he became Prime Minister, Trump revealed the Labour leader had requested to meet with him, but he'd declined.

"I didn't want to meet him. He's a negative force, a negative guy, he criticises me when he doesn't know me, I don't like people who are critical," the President said.

Despite such revealing disclosures, the presser was surely maddening for assorted hacks in attendance, given Trump steadfastly refused to slip up or say anything shocking — he spoke extremely warmly of the UK, its Prime Minister and Queen, and promised a post-Brexit trade deal with the US could mean "double, triple or quadruple trade" without restrictions.

Afterwards, baffled pundits on the ground valiantly scrabbled to put the worst possible spin on the conference, but the only real gaffe they could offer was Trump claiming to have not met Michael Gove previously, despite the Conservative leadership candidate being the first Briton to conduct an exclusive interview with the President after his election.

On 5th June, Trump journeyed to the D-Day commemorations in Southsea Common, Portsmouth. Security was extremely tight, with residents and visitors prevented from getting anywhere near the official area — while some locals grumbled about not being able to see the Queen or the President, most in typically British fashion simply brought deckchairs and picnics and set up shop in front of the large screens broadcasting the event. 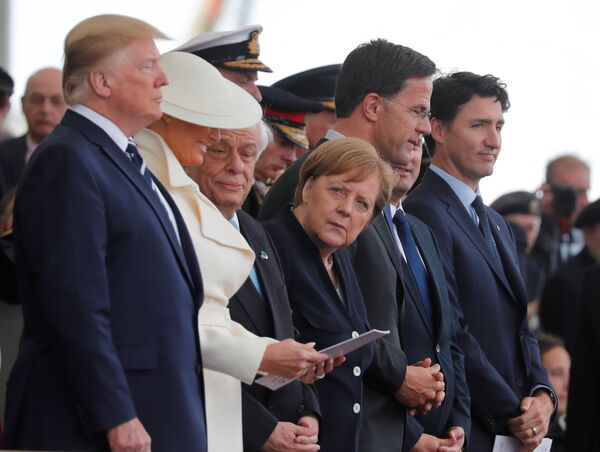 U.S. President Donald Trump, First Lady Melania, German Chancellor Angela Merkel, Dutch Prime Minister Mark Rutte and Canada's Prime Minister Justin Trudeau participate in an event to commemorate the 75th anniversary of D-Day, in Portsmouth, Britain, June 5, 2019
© REUTERS / Carlos Barria
A mile away, some protesters gathered in Portsmouth's Guildhall Square — while the distance was intended to make clear they weren't objecting to veterans, a large group of Portsmouth Football Club supporters were still unhappy about their presence, marching through the crowd chanting "shame on you".

Insulated from the noise, the President read from a prayer written by Franklin D. Roosevelt ahead of the invasion in 1944. Speaking to the press afterwards, he paid his respects to D-Day veterans, and bid farewell to the Queen, saying it was a "great honour" to be with her.

A group of pro Trump football casual types have just arrived at the anti Trump protest on the centre of Portsmouth pic.twitter.com/zGGhZQ1w1a

​Now, he will head to Normandy for commemoration events there. His welcome may be much warmer in France, as according to a YouGov poll published 4th June the percentage of French citizens who have a positive image of him is 19 percent, up from seven percent in November 2017. Among them are Yellow Vest protesters, who believe he puts his own country's interests first — by comparison, France's president Emmanuel Macron hovers at around 30 percent. Moreover, 62 percent believed it right for Macron to invite him to Normandy.

No similar survey has been conducted in Britain recently, although the question of whether his standing has risen in the UK as a result of the trip is an intriguing one — a May YouGov poll suggested 63 percent of Britons think Trump has been a "poor or terrible" leader, the figure rising to 71 percent in London, and 72 percent in Scotland.

Speaking after yesterday's press conference, Trump restated his support of the ‘special relationship', and commitment to inking a "tremendous" trade deal with London. Many Britons will surely be hoping the President's good to his word — and given the very different picture of him they've seen over the past few days, their trust that he is could well be extremely high.