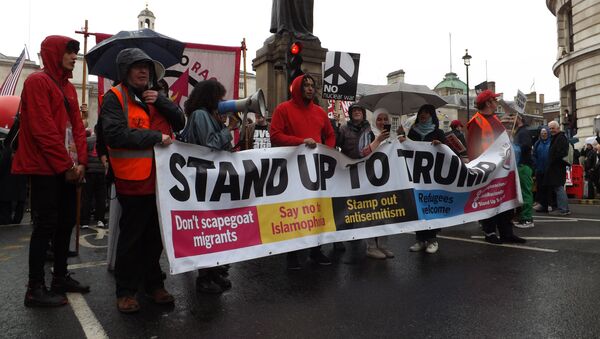 © Sputnik / Demond Cureton
Subscribe
US President Donald Trump took to Twitter as protesters flooded the streets in London during his UK visit, saying he had heard of impending “massive rallies” against him, but in fact there were also those who had gathered in support of the USA and him.

In footage filmed on Tuesday, a man wearing a red cap with US President Donald Trump’s slogan on it was singled out by a group of anti-Trump protesters who chanted “Nazi scum” at him before hurtling a milkshake at the POTUS supporter.

The “milkshaked” man claimed he was peacefully debating with “moderate lefties” and “having a laugh with the majority of them” before he was mobbed, writes The Sun.

In the clip, he is seen shouting “here to stay” before throwing the creamy beverage back at the crowd.

A Trump supporter is milkshaked by a hostile crowd in Parliament Square.

The video later shows him lunging at the jeering group, with one cop on the scene attempting to intervene, before more officers rush in to escort the man away.

The victim of the angry mob later said he supported Trump because “he's done more than he said he was going to do for America”.

He added: “He's true to his word when he said he wants to make America great again.”

The footage doesn’t capture what sparked the flare-up, but reportedly the man was heard arguing with an anti-Trump protester about Parliament.

Speaking to the Daily Mail, the POTUS advocate said:

“We have to put forward how aggressive the left can be — it's not us, you know if they want to call me right wing because I'm supporting Trump then I must be right wing, but I'm not a racist”.

“I came out to support Trump, to stop the left who since we voted for Brexit have been protesting against democracy”.

“This is the democratically elected president of the free world. I just wanted a debate with the sensible left, I didn't expect any of what happened”.

In another exchange, a pro-Trump supporter filmed herself popping a giant blimp of the president before exclaiming “that's a disgrace”.

The Sun writes that the woman is believed to be Amy Beth Dallamura — AKA Based Amy — a well-known blogger who has been pictured at Free Tommy Robinson demonstrations.

US President Donald Trump tweeted his reaction to the incidents in the crowd, saying he had heard of impending “massive rallies” against him in UK, but in fact he’d witnessed those that had gathered in support of the USA and himself.

I kept hearing that there would be “massive” rallies against me in the UK, but it was quite the opposite. The big crowds, which the Corrupt Media hates to show, were those that gathered in support of the USA and me. They were big & enthusiastic as opposed to the organized flops!

The violent incidents among protesters followed an impassioned speech by Labour leader Jeremy Corbyn in Trafalgar Square, where he told the anti-Trump group that the US president had “created a greater sense of hate and hatred that goes with it”.

Earlier, at a Tuesday press conference with UK Prime Minister Theresa May, Trump slammed Corbyn for being “negative”, revealing that he turned down a request for a meeting from the Labour leader.

Trump said: “He wanted to meet, today or tomorrow, I decided I would not do that”.

“I don't know Jeremy Corbyn, I've never met him, never spoke to him. I think that he is, from where I come from, somewhat of a negative force”.

Milkshake or other beverage attacks targeting politicians have become a trend in Britain, with people beginning to dump the dessert on right-wing politicians and figures.

The first target was EDL founder Tommy Robinson when he was doused in milkshake twice in one day while campaigning to be an MEP in Bury and Warrington.

Since then, other right-wingers have also been pelted with beverages, including Nigel Farage, while out campaigning in Newcastle for the Brexit Party ahead of European elections.

UKIP candidate Carl Benjamin, who made a rape-related joke about a Labour MP, was also attacked with a milkshake.

Last month, a Brexit Party-supporting pensioner was soaked in milkshake outside a polling station.

000000
Popular comments
This must be the joke of the century, The cleaver Brits running around protesting Trumps visit to UK, While there own treasonous government has failed to deliver on brexit, Blamed Russia for the Skripal poisoning, when even a fool could see it was an inside job, Backed up the USA on it,s murderous rempage across the middle east, and elsewhere, But thats ok, we,ll protest Trump...IDIOTS.
stevenrobertchurchill
5 June 2019, 14:08 GMT1
000000
Newsfeed
0
New firstOld first
loader
LIVE
Заголовок открываемого материала
Access to the chat has been blocked for violating the rules . You will be able to participate again through:∞. If you do not agree with the blocking, please use the feedback form
The discussion is closed. You can participate in the discussion within 24 hours after the publication of the article.
To participate in the discussion
log in or register
loader
Chats
Заголовок открываемого материала
Worldwide
InternationalEnglishEnglishMundoEspañolSpanish
Europe
DeutschlandDeutschGermanFranceFrançaisFrenchΕλλάδαΕλληνικάGreekItaliaItalianoItalianČeská republikaČeštinaCzechPolskaPolskiPolishСрбиjаСрпскиSerbianLatvijaLatviešuLatvianLietuvaLietuviųLithuanianMoldovaMoldoveneascăMoldavianБеларусьБеларускiBelarusian
Transcaucasia
ԱրմենիաՀայերենArmenianАҧсныАҧсышәалаAbkhazХуссар ИрыстонИронауОssetianსაქართველოქართულიGeorgianAzərbaycanАzərbaycancaAzerbaijani
Middle East
Sputnik عربيArabicArabicTürkiyeTürkçeTurkishSputnik ایرانPersianPersianSputnik افغانستانDariDari
Central Asia
ҚазақстанҚазақ тіліKazakhКыргызстанКыргызчаKyrgyzOʻzbekistonЎзбекчаUzbekТоҷикистонТоҷикӣTajik
East & Southeast Asia
Việt NamTiếng ViệtVietnamese日本日本語Japanese俄罗斯卫星通讯社中文（简体）Chinese (simplified)俄罗斯卫星通讯社中文（繁体）Chinese (traditional)
South America
BrasilPortuguêsPortuguese
NewsfeedBreaking
04:30 GMTA Sigh That Tells It All: Golden Retriever Wants Attention
04:28 GMTLive Updates: Germany Registers 10,454 New COVID-19 Cases
04:11 GMTFlorida Gov. Orders All State Agencies to Search for Laundrie After Petito's Remains Confirmed
03:43 GMT'Nothing New on That': Bill Gates Brushes Off Question About His ‘Dinners’ With Epstein
03:33 GMTGOP Politicians Stand by US Border Patrol After Claims They 'Whipped' Refugees at Rio Grande River
03:14 GMTPele Cheers Up Fans by Posting Video of Him Riding Exercycle in Hospital
03:07 GMTAxis of Resistance Killed US, Israeli Commanders in Revenge for Soleimani's Assassination - Report
02:56 GMTPolitical Capital & GOP in His ’Grip’: Trump ’Wants Back’ in 2024, Journos Say
01:43 GMTIRGC Chief: Iran No Longer Sees US as Threat - Report
01:18 GMTChinese Covid Vaccines Reach 100 Nations, But WHO Warns Africa Still Short 470 Million Shots in 2021
01:04 GMTAwkward Moment as White House Staff Cuts Off Biden-Johnson Meeting in Mid-Sentence
00:20 GMTVideo: Military Jet Intercepts Small Aircraft Over NYC in the Middle of UN General Assembly
00:19 GMTPark Ranger ‘Implored’ Gabby Petito to Distance Herself From Toxic Relationship With Brian Laundrie
YesterdayVideos: 6.0 Earthquake Strikes Southeastern Australia
YesterdayPro-Reunification Candidate Chang Ya-chung Edges Ahead as Chairman Election in Taiwan’s KMT Nears
YesterdayTexas Governor Vows to Prevent Del Rio Migrant Surge Disaster From Being Replicated
YesterdayUber’s Business Model Faces Threat After Legal Setback Across Europe
YesterdayUS Lawsuit Challenges Alliance of 2 Airlines for Stifling Competition
YesterdayTaliban Say No Al-Qaeda Members Present in Afghanistan
YesterdayJoe Biden Faces Backlash Over Inept UN Speech